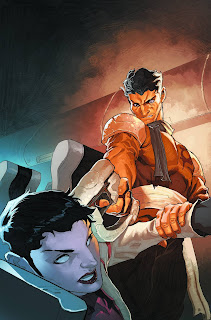 In The Omega Men #10, Kyle Rayner and the Omega Men lead the defence of the planet Harna in a long, gruelling, 41-day battle. It is a real contrast to earlier issues of the series, which would tell a storyline in what felt like real-time. Here we're often getting one panel per day of story time, and both writer Tom King and artist Barnaby Bagenda really make it work remarkably well.

It has been a remarkably strong and enjoyable comic, using the DC Universe to tell an epic and atmospheric space opera with a richly designed world and a great cast of characters. While it failed to attract a large group of readers - February sales estimates put the print readership at under 9,000 - everyone involved in putting the book together should be really proud: I would honestly put this up alongside Snyder and Capullo's Batman and Azarello and Chiang's Wonder Woman as one of the best titles DC has published in the last five years.

The Omega Men ends in two issues. As a keen fan of the book I am grateful to DC for giving King the extra six issues he needed to properly end the story. Readers looking for a great science fiction comic should check it out when the trade paperback arrives. Moving on, I will be keeping an eye out for both King and Bagenda's work in future. King is already halfway through an exceptional Vertigo miniseries, The Sheriff of Babylon, and is taking over Batman in June. Fingers crossed at some point he and Bagenda collaborate again. (5/5)

Under the cut: reviews of Batman and Robin Eternal, Daredevil and Saga.

DC's weekly Robin-centric saga comes to an end in a highly satisfying blockbuster fashion. It does what the best of these kinds of superhero epics do: wrap up a long-running storyline, give the core cast great moments to shine, and set up some story directions for the future. While not every issue was great - then again, what serialised comic can claim otherwise? - overall this has been a much stronger comic than Batman Eternal was. We leave it with a renewed sense of family among Batman's four Robins, a well-developed and fleshed-out Harper Row, and a solid re-introduction to the DC Universe of Cassandra Cain - now using the alias Orphan. (5/5)

Daredevil's first new story arc reaches a climax, as Matt returns to save the followers of a cult-like crime boss from a magically-empowered ninja attack. It's a strong issue, with great moody artwork by Ron Garney and a solid focus on Daredevil's new sidekick Blindspot. I am still not convinced overall by this new volume of Daredevil, which feels like a slightly retrograde step following the long run by Mark Waid, but it has improved issue by issue and may fully impress me yet. (3/5)

The current story arc hits its penultimate issue, which essentially entails moving a whole pile of characters into position for an all-out climax next issue. Despite being a 'moving-the-scenery' sort of an issue, Vaughn packs a hell of a lot of plot and character into it, and gives the whole thing a tremendous sense of momentum. Fiona Staples artwork feels particularly energetic as well. I really cannot wait to see what happens next month - knowing how arcs in this book usually conclude, it's probably not going to be too happy. (4/5)
Posted by Grant at 9:47 AM