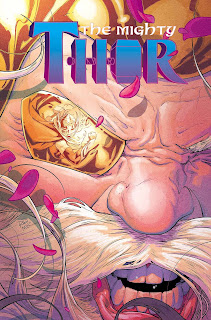 The Mighty Thor has been through some fairly big upheavals in recent months. Thor himself has lost the ability to wield his enchanted hammer Mjolnir, and it has instead fallen to his former girlfriend and terminal cancer patient Jane Foster. In the guise of a new female Thor Jane has struggled to avert a dark elf invasion of the light elf realm, has fought Thor's adopted brother and arch-rival Loki, and begins this issue in a pitched epic fist-fight with the god Odin for the right to continue bearing Mjolnir.

This issue acts as essentially a first-act climax, since it momentarily resolves Thor and Odin's battle, the civil war boiling over in Asgard, and Malekith's invasion of Alfheim. There is clearly a lot more to occur in this story, but it's a natural climactic point that satisfies while making the reader crave the next issue as well. It comes with some real surprises too, which will make the wait for issue #6 all the more interminable. I was uncertain of this book when it relaunched - it had something of a messy opening - but it's settled down and now tells a gripping and highly dramatic epic fantasy story.

Russell Dauterman's art continues to impress. This is a gorgeous book, and Jason Aaron has written a storyline to give Dauterman a variety of visually arresting images to produce. Matthew Wilson's colours are superb, and complement the art wonderfully. (4/5)

Under the cut: reviews of Batman and Robin Eternal, The Massive: Ninth Wave and Ms Marvel.

There is a phenomenal increase in scale in Batman and Robin Eternal #23. Mother has activated satellites that are turning the children of the world into rioting maniacs, and if the signals are not stopped within minutes that riotous behaviour will turn actively homicidal. This springs not only Dick Grayson, Red Robin, Red Hood and Robin into action, but a veritable army of DC Universe low-level superheroes and vigilantes as well. There hasn't been a story lifted to this kind of a scale in quite a while and it's very enjoyable to read. I think next week may be the final issue of this series, but don't take my word for it. Certainly they're going to strain to squeeze it into 20 pages. (4/5)

This is a particularly bleak issue of Ninth Wave, which presents self-contained vignettes based around the eco-terrorist group led by Callum Israel. This issue sees several Ninth Wave members trapped onboard a runaway Indian vessel, and a chase to get them out before the ship sinks. Garry Brown's artwork and Jordie Bellaire's limited colours help give this issue a very stark, cold look that accentuates the desperation in the story. This is a weird miniseries. Narratively it feels somewhat redundant, since it adds nothing we couldn't have surmised from reading The Massive, but stylistically it is a brilliant showcase of economic storytelling. (4/5)

A science experiment to create a few clones of Kamala seemed a good idea - she could go to school, obey her parents, and fight crime as Ms Marvel at the same time. Unfortunately the process has veered wildly out of control, and now New Jersey is becoming overrun with Kamalas. It is a cute idea, and the humour of the piece is emphasised by Nico Leon's fairly adorable artwork, but in the end this feels like a pretty silly and disposable storyline. It's fun, but this book has done way better in the past. (3/5)
Posted by Grant at 7:40 AM