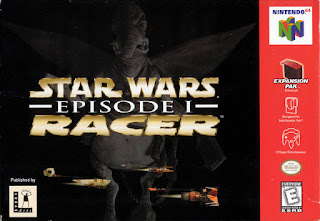 It is safe to say that when Star Wars: Episode I opened in cinemas around the world in May 1999, that the audience response was somewhat disappointed. The 16 years since the release of Return of the Jedi had created an anticipation that was effectively unsurpassable. Producer/director George Lucas could have made the best film of his career and it seems likely audiences would have still felt let down. The fact is he made the active hands-down worst film of his career, so it is not like we can blame the viewers for the poor esteem in which The Phantom Menace continues to be held. The story was weak. The acting was wooden. The digital sets and characters are made things look weirdly fake and artificial. A lengthy racing sequence in the middle was singled-out for particularly emphatic scorn. The pod race was described derisively as something out of a videogame.

Rather fittingly, while the film remains a punching bag among movie enthusiasts, the videogame-like pod race sequence actually did make for a pretty stunning videogame. LucasArts produced it themselves, releasing it alongside the film in May 1999 and making it the best aspect of the entire Phantom Menace experience.

The game falls into a particular sub-genre of future-style racing games, typified by F-Zero and WipEout. To my mind Episode I Racer is better than both of those titles. While it may lack the inventiveness or purity of vision of either of those games, it presents a far more enjoyable and slickly produced experience.

The player pilots a pot racer, a jet-powered hovering spaceship that cruises through a series of race courses on a variety of alien planets. You can select from a variety of racers and pilots, each with their own strengths and weaknesses. The courses are quite varied, both in terms of layouts and visuals. It all becomes gradually more difficult as the game progresses, with early stages offering a breakneck rush through some simple, uncomplicated tracks and later ones introducing a dangerous variety of hairpin turns and unexpected obstacles.

The player wins prize money as he or she wins each track, and the money won can be invested in incremental upgrades to their racer. This allows for a little bit of strategy and an ability to tailor one's racer to their own playing style, which is always welcome. There is also a little bit of strategy in the courses themselves: it is possible to repair damage to one's racer after a collision, but it comes at the expense of speed.

The make-or-break aspect of any racing game is the controls, and here is where Episode I Racer particularly excels. They are crisp and precise, and wonderfully responsive. The learning curve is not too steep, and that keeps one playing level after level in a rather addictive fashion.

The graphical demands of the game resulted in only a two-player option being offered, rather than the more entertaining four-player option in the likes of Mario Kart 64. That pretty much is the game's sole significant drawback. Asides from that, Episode I Racer is a wonderfully addictive and replayable racing game - and a Nintendo 64 highlight.
Posted by Grant at 9:39 AM