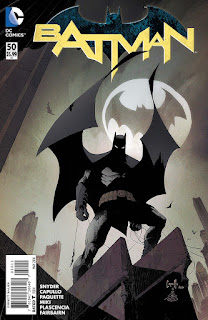 Over in the extra-length Batman #50, Bruce Wayne finally returns to duty as Batman after 10 issues on the sidelines. In his place Jim Gordon has been performing the role of a police-sanctioned Batman using high-tech corporate investment and a super-powered robot Batsuit. Now both men unite to take down the bizarre new villain Mr Bloom, whose growing powers have led to him mutating into a strange giant monster that looms over Gotham's buildings.

This also marks pretty much the end of Scott Snyder, Greg Capullo and Danny Miki's run on Batman. It kicked off when the New 52 started, and for about four and a half years it's been providing a string of high-concept, blockbuster-style epic storylines including "The Court of Owls", "Zero Year", "Death of the Family" and "Endgame". Some readers have chafed at the liberties this creative team has taken - notably Jim Gordon's Batman - while others have wallowed in the imaginative manner in which the characters have been stretched and transformed. I am firmly in the latter camp. This issue is pretty much a showcase for what the team do best, so if you've enjoyed the run you'll love the climax and if you haven't enjoyed it this is severely unlikely to change your mind.

There's an epilogue to go in issue #51 but essentially this is the end of the run, and it concludes in the manner these sorts of commercial ongoing superhero books should end. The toys are mostly put back in the box: Bruce is Batman again, Jim is the police commissioner again, and Gotham is back running in a familiar, comfortable fashion. A whole raft of new characters and story threads have been brought into Batman's world, and they're all there for future creative teams to shake up and exploit. (5/5)

Under the cut: reviews of Doctor Who: The 4th Doctor, Obi-Wan & Anakin, and Venus.

After publishing ongoing series for the 10th, 11th and 12th Doctors, Titan turned their attention to a rolling series of five-part miniseries - each focusing on a different past Doctor. After covering Christopher Eccleston's 9th Doctor, then Paul McGann's 8th, I honestly expected them to continue moving backwards via Sylvester McCoy's 7th. Instead they have leapt back - in retrospect quite understandably - to Tom Baker's legendary 4th Doctor for an all-new adventure with the Doctor and Sarah-Jane Smith. Sadly the resulting comic book is a little too slavishly faithful to its origins, with a Victorian London setting and what is kicking off as a very generic sort of storyline. It may improve, but for a first issue it is not very gripping. Brian Williamson's art also gets a little too obviously photo-referenced in places, which detracts from the story quite a bit. (2/5)

Obi-Wan and Anakin continue their mission on Carnelion IV, while flashbacks reveal the growing influence of Senator Palpatine over Anakin's upbringing. I was not entirely impressed with the first two issues of this five-part miniseries, but this third issue feels a lot stronger and more self-assured. The flashbacks are the highlight, adding depth and resonance to the events of the Star Wars prequel films, but there is also some great done here with Obi-Wan - a Jedi Padawan thrown a little too early into being a fully-fledged knight, and now tasked with training a rebellious apprentice of his own. Marco Checchetto's artwork is gorgeous, and beautifully coloured in a delicate fashion by Andres Mosa. (3/5)

I have really enjoyed this science fiction thriller, but I had some concerns that there would not be enough time in four issues to tell a whole story. Those concerns proved to be true with this fourth and final issue, which does give a small amount of resolution but clearly lives an enormous amount hanging in the air for some hypothetical sequel series. It's still well-written, intelligent science fiction, and Huang Danlan's artwork is clean and immensely readable, but after three issues of build-up it cannot help but be something of a let-down. I hope a Venus II is coming soon to alleviate readers' frustration. (3/5)
Posted by Grant at 2:50 PM