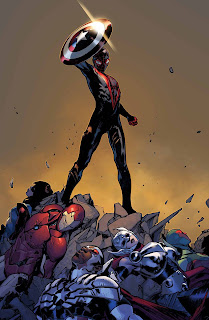 With the second issue of the relaunched Spider-Man, writer Brian Michael Bendis gets really metatextual. The comic begins to refer to its existence as a Marvel comic book so much that I felt the need to check it was not an issue of Deadpool, or an old John Byrne issue of She-Hulk.

There are the jokes. Iron Man makes a reference to the demon they are fighting, noting: "Demon. Not in the bottle this time." Peter Parker corrects Miles Morales' recital of the famous "with great power" speech, noting that everybody misquotes it. These are all very slightly intrusive. The gag of the comic book characters referring to their own comics is simply not funny enough to be worth the reader getting thrown out of the narrative each time it happens.

On a more positive note there is the discussion of diversity. It has been hard to ignore Marvel's recent attempts to present a more diverse and varied roster of characters, not simply with introducing new characters but by recasting existing superhero identities with new people. Miles Morales was pretty much the first attempt at this, replacing the Caucasian Peter Parker with a half-African American half-Latino teenager. Since then Marvel has introduced a Muslim Ms Marvel, an African American Captain America and a female Thor. This issue of Spider-Man actually has characters discuss this, and in response Miles bemoans being heralded as a Spider-Man of colour. All he wants is to be heralded as Spider-Man. It works incredibly well, and generates a nice moment of character.

Asides from that there is some solid Spider-Man versus demon action, some well-placed moments of humour, and typically excellent artwork by Sara Pichelli and Gaetano Carlucci. This is a much stronger issue than last month. Anyone underwhelmed by issue #1 would be well advised to check this issue too before deciding whether or not to keep reading. (3/5)

Under the cut: reviews of Batman and Robin Eternal, Darth Vader and Revival.

Mother's masterplan moves one step closer to fruition. Cass and Harper are placed in even greater peril. Back at Spyral, the four assembled Robins struggle to find a path forward - and each suffers a crisis of conscience. This is an excellently script issue, by the wonderfully talented Genevieve Valentine (Catwoman). It really emphasises Batman's special relationship with and intentions regarding his current and former sidekicks. It is actually quite outstanding how Batman, who has only appeared in this series in flashbacks, has still managed to cast such a strong shadow over the entire narrative. This is to an extent one of those 'calm before the storm' issues, but it's a really good one. It's also very pleasing to see Damian finally join the cast. (4/5)

Darth Vader continues to lead the war against those aristocrats of the planet Sho-Torun who resist the Empire's rule. It is actually a bit of a relief, after the early continuity-heavy arcs, to have a few issues in a row that do not rely on cameos by pre-existing Star Wars characters or tying too heavily into the events of the feature films. The action, when it occurs, is solid and entertaining. The character work is, as always, excellent. This is a great comic book. (4/5)

With a continuing storyline and 36 issues under its belt, you would be forgiven for assuming Revival would be falling into a narrative formula by now. Issue #37 surprised me at least with its rather inventive approach to its characters, showing not only what they are doing but what they had wanted to be doing with their lives. It makes for a somewhat melancholic read, but is - as always - a great read too. With this book heading into its final stretch, I am deliberately savouring each new chapter while I still get them. (4/5)
Posted by Grant at 8:00 AM