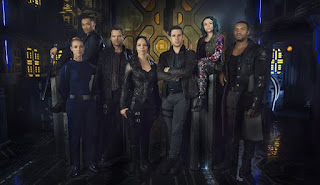 Six strangers wake up from suspended animation on an otherwise abandoned spaceship. None of them can remember who they are or how they came to be on the ship. Soon they are attacked by an android, and then by another spaceship. By following the ship's original course they find themselves on an isolated mining colony - but do not know why they were headed there in the first place.

Dark Matter is a Canadian science fiction series based on the comic book of the same name. It boasts an intriguing premise, but from this first episode it is difficult to decide whether that premise works well for an ongoing television series. Amnesiac heroes are a dime a dozen, but six of them at once? That's an awful lot of semi-anonymous angst to squeeze into 42 minutes.

Six amnesiac protagonists is a big ask for an audience. Pretty soon after waking, and calming down from the initial panic, one of them assigns numbers to each of them in the order that they were revived. That gives the audience a cast named One through Six and effectively no means of remembering which is which. As a result one instinctively goes for the short-hand: 'tall black guy', 'thin concerned white guy', 'Asian guy with a sword', and so on. That isn't helpful to the viewer or the series. It is a weird barrier that prevents audience engagement.

The episode is, for the most part, six strangers wandering around a spaceship looking confused. It gets oddly repetitive very quickly. There's a third act visit to a mining colony that shows some promise, since the six strangers know where they were going but not why - and indeed they ultimately get the purpose of their visit catastrophically wrong, which does make for a neat cliffhanger ending. It is simply a shame that the episode takes so long to get to something that interesting.

There are a few too many clichés at work too. Three (Anthony Lemke) plays the cynical, selfish bastard of the group. Four (Alex Mallari Jr) is a cool, silent Asian man with twin swords - because of course in a universe of advanced particle weapons the Asian guy is going to dual wield swords. Five (Jodelle Ferland) is the archetypal cute teenage girl with technical wizard skills beyond her years - because that seems a requisite character for all of these kinds of shows since Joss Whedon invented Willow Rosenberg. Keeping Whedon in mind, it seems pretty clear that among other things Dark Matter has one eye on filling the void left by the short-lived Whedon series Firefly. They both feature wandering spaceships, self-interested mercenaries and a bit of conflict between each of the leads.

It is all just a little bit too well-worn, derivative and familiar. Future episodes may hopefully break out from predictable genre conventions, but for now Dark Matter is just hopelessly generic. A sub-set of science fiction fans will lap it up because it's set in the future and has spaceships in it. More discerning viewers will likely move on pretty quickly.
Posted by Grant at 7:55 AM