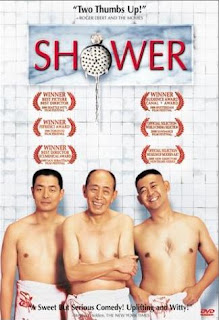 Daming (Pu Cunxin) is an up-and-coming executive living in the southern Chinese city of Shenzhen. When he gets the mistaken impression that his elderly father (Zhu Xu) is dying, he rushes home to Beijing and the family's public bathhouse. While there he comes to appreciate the family business that he abandoned, and forms a fresh bond with his father and his brother.

Shower is a Chinese comedy-drama directed by Zhang Yang. It plays with very well-worn story elements of family and duty, and the prodigal sun returning home and unexpectedly coming to embrace the small town life that he had so aggressively rejected. It is likely that most viewers will have seen similar stories played out screen several times before.

That said, there is nothing wrong with a film following a well-established road so long as it brings something else along for the ride. Shower brings a number of particularly strong performances and a gentle sense of realism that proves very emotionally effective.

The core of the film is Daming's relationships with both his father and brother. Daming left home on what seems like ill terms, and has rarely returned. He lives well away from his family, and is married to a woman they have never met. In his absence his father and brother have continued operating the family bathhouse, day in and day out, providing the men of the community with a place to gather and socialise. Some of them seem to be there all day and night - goodness knows what half of them do for a living. Daming only plans to be there for a day or two, but then two days extend to three, and then five, and before long he is reconnected with his estranged father and coming to understand the appeal of running the bathhouse as they do.

The entire suburb is on borrowed time, with the government all set to demolish the entire area to make way for new high-rise apartments. One of the key themes of the film is the threat of the new China overrunning the old. With his executive job down in Shenzhen Daming is representative of the new; his experiences connect him with the old. The demolition is, however, inevitable, giving the whole film a slightly bittersweet air.

Jiang Wu gives an excellent performance as younger brother Erming. He is mentally challenged, which in narrative terms feels like one of the film's most obvious stereotypes, but he largely rescues the character with his respectful and well-considered performance. It is particularly nice seeing how normally the various local residents and patrons treat him: he is never disrespected, and never bullied. Instead he is simply treated as just another member of the community. That in itself is worth the stereotypes of having the character there.

The story unfolds pretty much exactly as one would expect. There is an ensemble of supporting character, each with their old challenges and problems. You know from the outset that each of those problems will be solved by the end of the film, generally with the aid of the bathhouse or its operators. At the end of the second act the film segues from comedy to drama, and again it is something most viewers would have already anticipated. I imagine the well-worn story tropes will make Shower a bit of a chore for some viewers, but I think that would mean ignoring the warm, gentle manner in which those tropes are told, and the excellent performances that bring them to life.
Posted by Grant at 9:11 AM