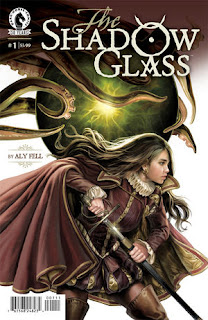 A bold young woman in Elizabethan England learns that the man she assumed was her father was not, leading her straight to the noted occultist Dr John Dee and the real father she has been warned to never meet. That is the first issue of The Shadow Glass in a nutshell. It is a six-issue miniseries written and illustrated by Aly Fell. At this early stage it is impossible to fully categorise its genre. It is a historical drama, certainly, but whether it is to fall into fantasy or horror territory is yet to be determined - it seems likely to be one or the other.

There is a slightly mannered style to Fell's dialogue. On the one hand it does feel somewhat appropriate to the period setting. On the other it pushes the reader a little bit away from the narrative, since we never really find ourselves too close to the characters. It is visibly well researched, however, and fans of Elizabethan history, the occult and John Dee himself will find a lot to absorb and enjoy here. Even the book's logo seems designed to appeal to them.

Fell's art is remarkable, and to be honest it's this book's main selling point. It is a gorgeously composed and very European, and ridiculously easy on the eye. This issue, while imperfect, shows tremendous promise. I am keen to see how it develops over the coming issues. (4/5)

Under the cut: reviews of Batman and Robin Eternal, The Spire and We Are Robin.

This penultimate issue feels like busywork: a cliffhanger isn't resolved so much as immediately deflated, while Dick Grayson gets to spend a few unnecessary pages fighting with Azrael for no particular reason. There's a lot in this issue that simply concludes obvious plot beats in order to pave the way for one final issue, and nothing that leaps out or surprises the reader. Javi Pina and Goran Sudzuka's artwork is functional without leaping out and grabbing attention. The script is somewhere close to that to: serviceable, doing it's job, but not actually making any kind of proper impression. For a climax of a 26-issue storyline, I expected more. (2/5)

Things fall into place, the various pawns are gathered around the board, and other descriptive clichés: this is the classic penultimate issue of a comic miniseries that pulls the narrative towards a single point and leaves the climax for the following month. This has been a great series, with a richly developed world, engaging characters and a wonderful central mystery. The art has consistently impressed with a sort of Miyazaki-meets-Moebius edge to it, and Simon Spurrier's script has been rich with effective dialogue and characterisation. It has also been remarkably consistent: this is easily one of my favourite comic books of the last few years. (5/5)

We Are Robin has been a fairly odd DC title. The concept - a group of Gotham teenagers band together and become a vigilante team - is rock-solid, and the individual characters have been wonderfully varied and well realised. Plotwise it has felt a bit all over the place. The team started to get together, then immediately got broken apart by the Robin War crossover, and now is slowly coming back together right at the point where it seems DC is going to cancel the book. It's a frustrating sort of trajectory, because it feels like this series never really got a chance. This current story arc, in which Gotham becomes terrorised by a Joker-inspired teen gang, has been exactly the sort of thing I've wanted from the book from day one, but it feels I'm getting it too late. (3/5)
Posted by Grant at 2:41 PM