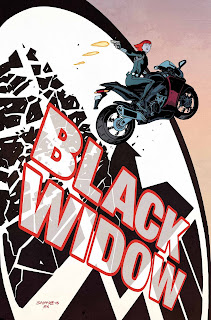 Pretty much the most consistently brilliant Marvel comic of recent years was Mark Waid and Chris Samnee's stunning run on Daredevil. They told crisp, brilliantly plotted stories with simple, clean artwork and absolutely brilliant panel layouts. They got to the core of Matt Murdock's character and found fresh angles and surprises for him from the beginning of Waid's run - originally with Paolo Rivera - right through to the end about five years later.

Last year they wrapped up their Daredevil run, but thankfully they have kept the band together - including excellent colourist Matthew Wilson. Their new project launched today: an all-new monthly volume of Black Widow. It is a tantalising prospect: Marvel's best creative team taking on one of the company's most in-fashion characters. Natasha Romanov has been a regular fixture of Marvel Comics for decades, but it is only really since her feature film debut in Iron Man 2 (played by Scarlett Johansson) that she has shot into the upper echelons of popularity with many comic book readers.

This first issue is stunning. It is short on dialogue but incredibly high on action. Samnee is now actively co-writing the book with Waid, and his influence shows. This is a much more visual experience than Daredevil was - and Daredevil was already pretty damned sensational. Matthew Wilson uses a deliberately limited colour palette to accentuate each action beat as it occurs.

This is a faultless opening to what I hope is a long and successful run. Trust me: you want to read this comic book. It is going to astonishingly good. (5/5)

Under the cut: reviews of Doctor Who, Another Castle and The Omega Men.

Artemesia - also known as "Misty" - is a rebellious princess living in a magical kingdom. When she is kidnapped by the servants of the evil Badlus, he gives Misty an ultimatum: marry him, or see her kingdom destroyed. Misty, however, has a violent plan up her sleeve. I was intrigued by the title of this breezy stereotypical fantasy, which brings to mind Super Mario Bros - but was ultimately disappointed. The writing is generally capable, and the art similarly so, but there is simply nothing here to engage the reader. Any fresh angle is simply not fresh enough. The humour is too weak and forced. All in all, it's rather dull. (2/5)

If your idea of a great media tie-in book is rampant runaway continuity porn, then Titan Comic have the comic for you. This current storyline, now running into its sixth issue with no sign of an approaching conclusion, has already dragged in the Time War, the War Doctor, Absalom Daak the Dalek Killer and references to the Master. This issue adds River Song and the return to a planet I'm pretty sure no reader would be expecting to see again in a Doctor Who storyline. If you're among the hardcore, then this is pretty much a riot. If you're looking for original storytelling and new ideas - why on Earth are you reading a Doctor Who comic? (3/5)

It is so typical. Everybody always complains that DC Comics never tries anything fresh or new, and relentlessly recycles the same old legacy characters for volume after volume as the company narrows its target market to nostalgic and judgemental men in their late 30s. DC publishes something very fresh, and surprisingly new, and it's as if you can hear crickets. The Omega Men has already been cancelled, with only a few issues left to run. It's possibly the best monthly book published by DC Comics in the last five years. It is a smartly written, rather dark space opera starring former Green Lantern Kyle Rayner. It features a great plot and strong characters. It has distinctive and beautiful artwork boasting imaginative designs and a wonderfully clean nine-panel layout. This issue is absolutely no different. (5/5)
Posted by Grant at 10:43 PM