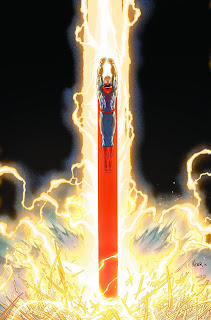 Action Comics #50 was released this week with a large page count and a higher cover price: US$4.99 for 40 pages of story, which is pretty good value by US comic book standards. The issue also marks the end for creative team Greg Pak and Aaron Kuder, who now step off for fresh properties elsewhere. Overall they have had a strong, nicely entertaining run. They introduced some great new supporting characters and made great use of some returning favourites - particularly Lana Lang. On the other hand the later issues of their run have been crippled by needless tie-ins and multi-title crossovers. I kept reading Action Comics, and to their credit they have made it possible to follow storylines while only reading one instalment in four, but it has been a challenge for me as a reader and I can't imagine it was great for them as creatives.

This issue sees Superman against the wall. He's leading a fight against Vandal Savage, and it is a fight he is losing. He has lost all of his powers, and is only still fighting because he's re-powered himself with a fatal dose of kryptonite. Much of the Justice League has already been knocked out of action. This issue marks something of a final stand.

Broadly speaking it's pretty great. A quite astonishing number of artists have contributed to this issue, so in visual terms it is a little all over the shop. There's a lot of emotion running through it, however, and Kuder's layouts do manage to broadly keep everything together. The good part of the issue is that it really does feel like a triumphant climax to Kuder and Pak's run. The bad news is that despite this it still ends on a cliffhanger and the story continues in Superman/Wonder Woman. I'm going to assume Superman wins the day. (3/5)

Under the cut: reviews of Detective Comics, Doctor Strange and The X Files: Deviations.

Much like Action Comics, Detective Comics hits issue #50 with an extended, expensive celebratory extravaganza. Unfortunately it does this by packaging a regular issue - the climax of Peter J. Tomasi's three-part storyline - with an unnecessary and indulgent series of splash pages by different artists, intended as a sort of celebration of all things Batman. Some readers may like it. I found it unnecessary and a pretty weak reason to charge readers an extra dollar. Thankfully Tomasi's climax, illustrated by Pasarin, Eaton, Ryan and Faucher, is pretty solid stuff. (3/5)

Some quick observations about Doctor Strange #6. Firstly it took seven artists to ink this issue, which like Action Comics seems a trifle excessive. Secondly the cover proudly announces it is the beginning of a new story arc; it isn't. It begins in the middle of a story and ends still in the middle of that story. Thirdly this ongoing arc focuses on a non-magical villain going from dimension to dimension wiping out all magic in revenge for what magicians once did to him. That is basically the exactly same premise of Jason Aaron's acclaimed "Godkiller" arc in Thor: God of Thunder a few years back, and it suddenly struck me that he is recycling his own plot. This is an entertaining book, but to be honest Bachalo's art is just a bit too messy and incoherent, and there simply isn't the spark I got when Aaron told this story the first time. (3/5)

It's the beginning of The X Files all over again, with Dana Scully attached to debunk the work of UFO obsessive Agent Mulder - only this time around it's Samantha Mulder, sister of abductee Fox. There is a neat sort of 'what if' thing going on with IDW's Deviations series of one-shots. Certainly this issue is neatly written and very nicely illustrated, but sadly it doesn't really go anywhere. It sets up some characters and that's about it. It is a missed opportunity. (2/5)
Posted by Grant at 11:28 PM