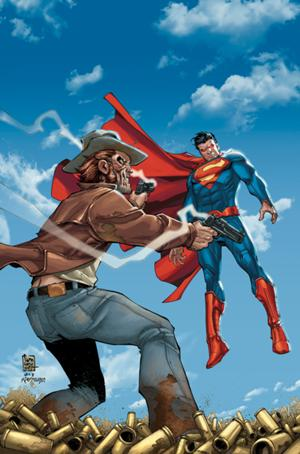 When it launched in September 2011 All-Star Western was one of my favourite books in DC's New 52. It teamed up 19th century bounty hunter Jonah Hex with the fastidious and bookish Amadeus Arkham - who would ultimate found Gotham City's infamous mental institution Arkham Asylum. The books seemed like a wonderful blend, combining western action with historical Gotham, allowing for numerous references to the broader DC Universe while still telling entertaining stories.

Sadly my tastes don't seem to have aligned with general comic book readers, because while I thought it was a great book very few comic fans seemed to buy it. The sales dropped from 39,000 at launch to 23,000 by the end of its first year, then 14,000 by the end of its second. It's now hovering perilously close to cancellation. To give the book a chance at gaining some new readers, writers Jimmy Palmiotti and Justin Gray have thrown Jonah Hex into his far future where he is now trapped, wandering 21st century America. He's basically on a road trip. He's met Batman, John Constantine, Swamp Thing and - in All-Star Western #27 - gets to hang out with Superman.

It's a dreadful idea. They may co-exist in the broader DC Universe but Superman and Jonah Hex do not mesh together at all well. It's also getting ridiculous how Hex's road trip is leading him from one DC hero to another without any real logic dictating why. In the issue's second half Hex is dragged to a museum where his own life story is presented as an exhibit, a scene that could be good but isn't. All up I'm rather sad. Moritat's art continues to impress, but the writing has gone out of the window. This used to be an excellent comic that couldn't find an audience. Now it's a bad comic that still can't find an audience. (1/5)

Under the cut: reviews of Aquaman, Batman and Robin, Black Science, Cataclysm: The Ultimates' Last Stand, The Flash, The Green Team: Teen Trillionaires, Guardians of the Galaxy, Revival, Saga, Thor: God of Thunder and X-Men Legacy. I want to say right here above the cut: this was a really decent week for comics, with only one other glaring misfire in my stack.

Aquaman spends much of this issue fighting a giant sea monster in the ocean off Reykjavik. Oh Jeff Parker, you had me at hello. This issue is a very tightly constructed blend of giant monster fight, character-enhancing flashback and long-running story threads: in short, it's exactly what every superhero monthly should be. The art is, despite some fill in work on some of the pages, great. (4/5)

This is a great one-shot retelling Dick Grayson's first adventure as Robin, way back in the early days of the New 52. It also manages to cleverly tie into the ongoing narrative of the monthly Batman and Robin by including Dick, Bruce Wayne and Alfred all continuing to mourn and remember Damian Wayne - who died some way back now. This is exactly the kind of comic book I expect from an annual: something self-contained, a bit longer than usual, and featuring rock-solid writing and artwork. It's a little pricey at $4.99, but in this case I'm pretty sure it's worth it. (4/5)

Now that we're three issues into Black Science it's a bit easier to see its strengths and weaknesses. First up, it's a breakneck-pace kind of a book, throwing the reader headlong into hellish surroundings and forcing them to keep up. It's highly inventive and tremendously exciting, and the pace is helped by judiciously placed flashbacks that slowly detail what happened to get us to where we are. The downside is the characterisation: we're three issues in and I'm really straining to remember who is who, what relationships bind one character to another and what all the different personalities are. In many ways the frantic, confused style of the narrative is the book's greatest asset and biggest drawback. Matteo Scalera's artwork is stunning, however, and on its own merits is more than worth the purchase. (4/5)

So this is genuinely weird: the three-part Cataclysm: Ultimate Spider-Man miniseries ended on a cliffhanger, telling readers to follow the story into the fourth issue of this miniseries. The first thing that happens is that a page of text tells you that between the last issue of the Spider-Man miniseries and this issue of this miniseries Spider-Man accompanied Captain America across to the main Marvel Universe to find an answer to what Galactus is and how to defeat him. That sort of strikes me as the sort of thing a reader of Ultimate Spider-Man might want to read. The rest of this issue feels almost unreadable: a bunch of characters I don't know shouting at each other and finishing off a plan I couldn't follow because I lacked the context from the first three issues. And about three panels with Spider-Man in it, none of which are the imagine shown on the cover. It's crazy sloppy, and disrespects readers who are paying good money for a solid story. (1/5)

Before he departs for other titles, Brian Buccellato has stayed on for one last two-part story. When the police uncover amass underground grave site, it sets Barry Allen off to solve one of the city's biggest cold cases. I loved this issue, because it combined Barry's professional and superheroic life, and managed to make the story personal to him as well. Patrick Zircher's art, while not as good as the departed Francis Manapul's, is great and suits the book well. (4/5)

Another one bites the dust, as they say. The Green Team was a valiant attempt to relaunch a very old, semi-obscure DC property. While it didn't connect with readers - it is the lowest-selling monthly book since the New 52 was launched - I still really enjoyed it for what it was. Appealing characters, a nice balance of humour and superhero drama and some very appealing artwork courtesy of Ig Guara and J.P. Meyer. To be honest it all felt a lot like one of those fun-but-failed superhero books from the mid-1990s. This issue does actually provide a satisfactory ending unlike other recent short-lived books (Katana, for example), and appears to leave a door open to the characters returning in the not-too-distant future. I like it. (3/5)

Guardians of the Galaxy #11.NOW

Now this is a jumping-on point. Whereas last week's All-New X-Men didn't really feel like it was an easy issue with which to simply drop in and start reading, Guardians of the Galaxy does a sensational job of filling in backstory, introducing characters, and continuing the crossover "Trial of Jean Grey" arc all at the same time. At first I was a little concerned that this issue didn't follow on from All-New X-Men, but rather tracks its own characters to the same final page, but it turns out this is a good thing: it provides all the information we didn't get last week on what exactly is going on, and gave readers an opportunity to read a lot of funny interplay and dialogue along the way. If I wasn't already buying too many comics every week, and if it wasn't $3.99 an issue, I would totally start reading this book regularly. (4/5)

The third story arc of Revival concludes, not with too much in the way of resolutions but with more than it's fair dose of nail-biting plot developments and cliffhangers. This is a mature, cleverly layered and intelligent horror comic, and Mike Norton's expressive artwork tells as much in terms of character and emotion as the dialogue does. I say this every month, but this comic is criminally overlooked. I'm getting tired of telling you all to buy it. (5/5)

Similarly, this is an exceptional comic book just finishing up its third story arc. It's a very unexpected issue. Things that you'd expect to take at least an issue on their own are resolved with a couple of sentences - they just happen to be brilliantly written sentences. It all wraps up in a very surprising way as well - I can't wait to see what happens next. I also continue to adore Fiona Staples' artwork, which shows so much imagination in developing the weird fantasy-fringed science fiction universe of Saga. Volume 4 can't come soon enough. (5/5)

When I originally posted this review, for some reason I thought Esad Ribic was the artist on this issue and gave it a glowing review misattributing Das Pastoras' stunning painterly artwork to Ribic. Apologies to Pastoras, who's done a sensational job on this this one-shot detailing a story of the young, reckless Thor of the 9th century. It's a self-contained tale of dragons, trolls, viking shieldmaidens and drunk gods. While Jason Aaron's script is very strong, it's Pastoras' artwork that makes this book sing. Now that I've been alerted to my mistake, I have to say I really hope they use Pastoras on the book again - he's a good match for the scripts, and a much better fit that Ron Garnet (who illustrated the last five issues). (4/5)

David Haller has reached his destiny, and his out-of-control psychic powers are going to destroy the entire world - unless Ruth can somehow get through to him. This is the second-last issue of one massive 24-issue storyline, so if you're not already onboard you're running too late. This is a fabulous issue, particularly because it's got some very clever structural techniques - check out the spiralling two-page spread halfway through for a good example. I'm going to miss this comic (particularly Mike Del Mundo's gorgeous covers), but on the other hand I love that it's getting such a solid, well-earned climax in February. (5/5)