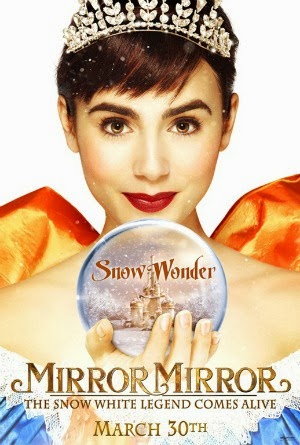 There's a regular phenomenon in Hollywood where two films will get released very closely to one another that share a basic plot, or theme, or concept. Whether it's duelling volcanos in 1997 (Dantes Peak and Volcano), asteroids hitting the Earth in 1998 (Deep Impact and Armageddon) or this year's rival Hercules projects (Renny Harlin versus Brett Ranter? It's a veritable sophie's choice), it comes about due to coincidence or, more often, pure bloody-mindedness. Studios always have an enormous number of projects on the boil, and if a rival announces a similar project is getting made you can either abandon your own plans or rush into production yourself and try to get into the cinemas first.

The subject matter of choice in 2012 was the popular folk story Snow White and the Seven Dwarfs. Of course it had been tackled many times before onscreen, both in animation and live action, but with the unexpected success of Tim Burton's Alice in Wonderland Hollywood was keen to start exploiting children's stories and fairy tales all over again.

In the red corner: Universal Pictures' Snow White and the Huntsman, an ultra-serious, effects-heavy action epic pitting Charlize Theron's wicked witch against Twilight's Kristen Stewart and Thor's Chris Hemsworth. The blue corner: Relativity Media's Mirror Mirror, a deliberately lighter, colourful and more aggressive self-conscious take starring Julia Roberts as the villainous queen and Lily Collins and Armie Hammer as Snow White and the prince respectively. I saw Huntstman in cinemas in 2012, because its trailer made it look rather awesome. It wasn't. I avoided Mirror Mirror until this weekend because its trailer made it look terrible.

And it is rather terrible, but it's a watchable terrible. Snow White and the Huntsman was a dour, depressing film shot in greys and browns, with everybody acting terribly serious and with every scene overloaded with portent. A bad movie may be watchable, but a pompous bad movie is untenable. Mirror Mirror, therefore, is a perversely refreshing contrast. It's a dreadful film, saddled with a script that's not one tenth as funny as it thinks it is, but it doesn't take it seriously and the cast appear to be having a pretty good time.

The film's director, Tarsem Singh, is a fabulous visual stylist, and has already applied his considerable talents to two great-looking bad movies: The Cell and Immortals. Mirror Mirror shows once again what great imagery he can extract from a bad script. It makes me wonder what he'd produce with a good one (his 2006 film The Fall is good but weird, I'd love to see him direct something both conventional and enjoyable). The costumes by Eiko Ishioka are even more impressive. Together they make the film a visual delight, one that would be an immense pleasure to watch if it wasn't for the awful, peppy screenplay.

Julia Roberts does exactly what you'd expect with the role of the evil queen, and how much you like her depends on how much you already like her. Lily Collins is an engaging screen presence, and manages to remain likeable throughout the film - as does Armie Hammer, who provides some of the film's few genuinely funny moments.

Perhaps the film's most unexpected component is just how weird it all is. The costumes are elaborate to the point of being self-consciously ridiculous. One of the seven dwarfs is a cowboy, without any explanation. Everybody speaks with gratingly contemporary American accents. The film's entire setting is deliberately artificial. It ends with... actually, I won't say how it ends, because it's so jaw-droppingly strange that it's worth experiencing cold for the first time.

This isn't a film to recommend - not really, it's awful - but if you are going to watch a 2012 Snow White adaptation this is definitely the one to watch.
Posted by Grant at 8:01 PM