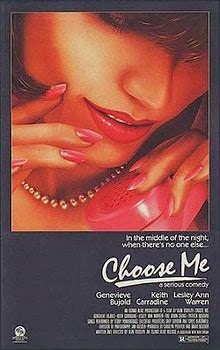 A late night radio counselor moves in with the owner of a bar, neither of them aware that they talk to each other every night on the air. When they both encounter an escaped mental patient, a love triangle rapidly develops.

Choose Me is a low budget drama from 1984, written and directed by Alan Rudolph and starring Genevieve Bujold, Lesley Ann Warren and Keith Carradine. You don't need to check the back of the DVD case to know that this is a 1980s film: it's practically soaked in neon, the on-the-nose musical score never seems to give up and the crass self-importance of its characters is a major giveaway. The film is entertaining in fits and starts, but never really gets its act together to be worth the 105 minutes it takes to watch it.

This isn't the cast's fault: they all give fantastic performances, particularly Bujold as the tightly wound, complicated radio host Nancy and Carradine as the unsettling drifter (and escaped mental patient) Mickey. The effect is like getting a Formula One racing driver to take your Cortina down to the shops: they do a stunning job driving it there, but the car still is what it is.

The film's storyline is the sort of thing you would put together if you wanted to make a parody of this kind of a movie. The bar owner who sleeps with her staff as well as her customers, who falls in love with the guy who broke the heart of the bar's original owner, and who rents a room in her massive house to a random stranger who just happens to be the agony aunt that she calls every night, and she doesn't notice this despite Bujold's obvious French-Canadian accent and distinctive voice. The escaped mental patient who's, you know, one of the fun people with a serious illness, who manages to chat up three women in the one movie without being sleazy and who earns the ire of a local gangster and no-good philanderer - who just happens to be the husband of one of the women being chatted up and the secret lover of another.

The usually on-the-money Pauline Kael liked this film on its original release, noting the 'entire movie has a lilting, loose, choreographic flow to it'. So does a child falling down a flight of stairs, if you shoot it in slow motion. And maybe light it with neon.
Posted by Grant at 2:53 PM