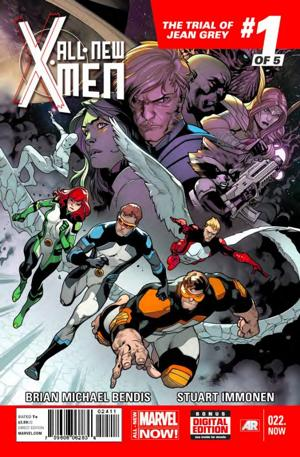 Marvel are trying something new with their current soft relaunch. They responded to DC's line-wide New 52 with what they called "Marvel Now", a set of new volumes for most of their old titles with new storylines, and creative teams, and new issue ones for the speculators to buy in ridiculous quantities. It worked okay, and certainly Marvel have maintained their market share lead over DC more months than not in the past year.

Now for some reason they're already launching again, with "All-New Marvel Now". Yet more titles are getting new volumes, only this time they're being relaunched in the most pointless of ways. Daredevil is a key example: the character's staying the same, the writer's staying, the artist is staying. All that's changing is the number on the cover, and a new story arc is starting.

Then there are the "Now" issues. New story arcs are being published not just with some signage on the cover indicating it's a new storyline; they're actually getting numbered with ".NOW" on the covers. It's a follow-up to their weird ".1" issues, I suppose. So, for example, this week's All-New X-Men isn't issue #22. It's issue #22.NOW. It looks ridiculous, and makes no sense. Am I the only one finding this all a bit weird?

As for the issue itself: certainly it's a new story arc, but it's an arc that's following on from the previous 21 issues with the original X-Men still trapped in the present day. This issue crosses over into Guardians of the Galaxy, and you know how much I love being forced to buy comics that aren't on my list just to understand a storyline. It's reasonably okay, but not entirely satisfactory. And really: what's with the .NOW numbering? Stop it. (3/5)

The GCPD go after Batman in a big way in this issue, which manages to successfully echo one of the most iconic sequences from Batman: Year One while still making sure it's charting its own course. We also get some great development in the relationship between Batman and Jim Gordon. Capullo and Miki's artwork continues to impress: it's packed with visual references to old story arcs and earlier iterations of the characters. This is an epic, immensely clever storyline that I am absolutely adoring. (5/5)

There are some pretty enormous changes made to Harvey Dent's backstory here, making him a more rounded and three-dimensional character. Peter Tomasi is the dark horse of DC's Bat-books: consistently producing strong and engaging superhero stories without ever really getting attention or critical acclaim. Gleason and Gray's artwork is pretty much perfectly matched. It's strong and very readable without ever attracting attention to itself. (4/5)

This issue has some outstanding artwork, thanks in part to fill-in artist Francis Manapul. Sadly the art is used on a series of double-page spreads: they may look fantastic, but with only 20 pages per issue that doesn't leave a lot of room for story. So when this story arc is inevitably collected into a trade paperback this issue will probably play very well. As a $2.99 single issue, however, it feels like dreadful value for money. (2/5)

The original story arc of Bedlam was brilliantly written by Nick Spencer and brilliantly illustrated by Riley Rossmo, and was one of my favourite books of the past few years. This second story arc, which concluded here, has been constantly interrupted by late shipments and delays, and has suffered from much weaker writing and muddier art by Ryan Browne. The result is a book that's gone from one I love to one I like, and from being the first book I check when I pick up my order to being one of the last. I'm still reading it, but my enthusiasm is waning. (2/5)

Phil Noto is doing some absolutely stunning artwork for this book, and Nathan Edmondson has written two excellent largely self-contained espionage stories to go with it. It's a bit cheeky of Marvel to publish the first three issues on a fortnightly schedule, but when the books this good it's an inconvenience and an expense that I will forgive. There's some nice continuing storytelling going on in the background here as well, particularly a very dark turn for Natasha's handler that I did not expect. This book's a keeper, and if you have any interest in a spy comic, or one with a strong female protagonist, then absolutely check it out. (5/5)

I liked issue #1 of this pulp revenge miniseries, but I love issue #2. This book just flies from page to page: it's not doing anything you haven't seen before, but it's doing it exceptionally well. If you're looking for a hard-boiled crime comic as a break from all the silly superheroes, this is a damn good one. I particularly like Matteo Scalera's stunning, cinematic artwork. You could claim this comic would make a stunning movie, but to be honest the art is so effective you're practically watching a movie in your head anyway. (5/5)

It's 1987, and a homeless teenager named Marcus finds himself picked up by a top-secret elite private school for young assassins. Remender is on a bit of a roll at the moment, with both his Marvel work and now two ongoing monthlies for Image. This isn't as accomplished as Black Science, but it's still a very entertaining read. Remender does take his time to properly introduce Marcus' situation and personality before the bullets start flying, which I appreciated. Wes Craig's artwork does a very good job with the action and chase sequences, and the colouring has a nice muted feel to it. (3/5)

Hawkeye has been a fairly irregular book, but one that I've given a lot of slack to because (a) the stories are generally episodic and self-contained enough for this not to be frustrating, and (b) the stories are generally incredibly entertaining. This is a whole new step in lateness, however, and frankly it has me flummoxed. Hawkeye #15 has been delayed - so much, in fact, that Hawkeye #16 has been released before it. This is a pretty fluffy self-contained tale for Kate Bishop in L.A., and entertaining enough, but really Marvel? You're releasing your books out of order now? (3/5)

Callum Israel's quest for the Massive moves on to Eastern Europe with the beginning of a new arc, and a quite literally explosive situation unfolding. One of things I really like about this book is how Brian Wood has confined each story to a tight three issues. This is giving the book a momentum and pace that makes it increasingly readable as the long-term story unfolds. I also really like how the book has slowly moved from region to region, exploring how global civilization has collapsed and staggered into some sort of recovery. (4/5)

This is another book kicking off on a new story arc, with co-writer Gabriel Hardman back on artistic duties. This is reasonably entertaining spin-offery, but it lacks the core appeal that Brian Wood's Star Wars has. At first I thought it was because Wood got to use Luke, Leia, Han, Vader and all of the other famous movie characters. On reflection, I think maybe the characters just aren't as interesting. With Dark Horse losing the license in 12 months it's difficult to see how far this book is going to manage to go. (3/5)

This is an issue for moving pieces around on the chessboard: while you're not going to find any groundbreaking moments or climactic action, you do get to take a breath and remember where each of the ongoing story's various characters are at the moment - both physically and emotionally. For Wonder Woman herself it means a return to Paradise Island where her Amazon sisters were turned to stone. For Zola it means getting into trouble with Dionysus. For Apollo it means attempting to break the resolve of his captive, the First One. When all is said and done this is probably going to be remembered as one of the best runs on Wonder Woman of all time. Cliff Chiang's art remains deeply expressive with such remarkable economy of detail. (4/5)