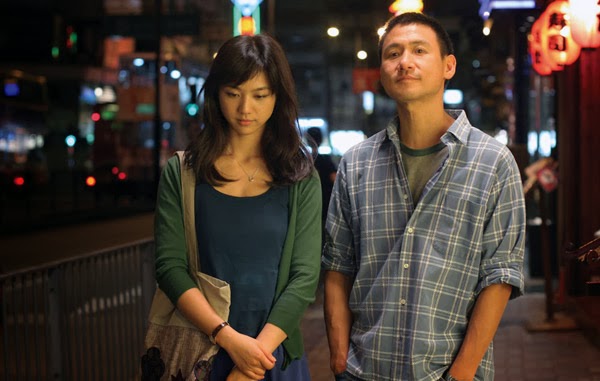 Crossing Hennessy, which was released in Hong Kong in 2010, was promoted as a romantic comedy. This does the film a disservice; it’s not only inaccurate it’s also unnecessarily reductionist. It turns out Crossing Hennessy is both a comedy and a rather touching drama. It blends the two genres with what comes across as disarming ease. I’m loathe to use the word “dramedy”, since that generally brings to mind the likes of American TV series Ally McBeal, and Crossing Hennessy is a much better viewing experience than Ally McBeal. It is, quite simply, a nice story told with warm, three-dimensional characters, and one that reaches its expected conclusion is nicely unexpected ways.

The film’s title comes from Hennessy Rd, which bisects the suburb of Wan Chai, on Hong Kong Island’s north side. The film is deeply cemented into its setting: this is a Wan Chai story, in much the same way that Get Carter was a Newcastle story, or Annie Hall and Manhattan were New York stories. Here the setting is essentially an extra character in the story. Wan Chai is a suburb filled with shop fronts, all selling everyday goods and services. It isn’t a business centre like Central, which lies to the west, or a fashionista’s paradise like Admiralty, which lies to the east. Wan Chai is the everyday, ordinary suburb wedged in between. It is suffering somewhat from urban decay, something that the Hong Kong SAR government is attempting to alleviate with their numerous urban renewal projects. Such projects come with a cost, however: it’s likely that the Wan Chai depicted in this film is not going to exist in 10 or 15 years’ time.

Wan Chai is the backdrop, but what is the story? Jackie Cheung plays Loy, a 41 year-old bachelor who still lives at home, sleeps in late every morning and works in his mother’s air-conditioner store. His mother, like many mothers, is desperate to see him matched up and married, so he periodically must acquiesce to yum cha meet-and-greets with his mother’s friends – and their eligible daughters. At one of these lunches Loy is introduced to Oi Lin (Wei Tang), the bookish niece of a local toilet shop owner. Oi Lin has no interest in being matched up. She already has a boyfriend, the muscular and volatile Xu (Andy On), who is currently in prison for assault. Meanwhile any interest Loy might have in Oi Lin is deflected by the return of his own ex-girlfriend, a career-driven photographer played by Maggie Cheung Ho-Yee (an actress often referred to as “the other Maggie Cheung”, in deference to the better known Hong Kong star Maggie Cheung of Police Story and Irma Vep fame).

Jackie Cheung is a massively appealing lead as Loy. It would be easy for the character to be portrayed as a little pathetic, but it’s a testament to Cheung’s acting and Ho’s writing and direction that he remains as deeply likeable as he is. There is a realism to Loy. He isn’t a heartthrob. He doesn’t come across as a typical romantic lead. Instead he’s an ordinary person, leading a cast of delightfully ordinary characters.

And the thing is, making ordinary people entertaining is hard. Cinema gravitates towards the unique and the unusual. It craves exciting people doing exciting things. What it generally doesn’t crave is a slow, awkward friendship that builds between a guy who works at an air conditioner store and a girl who works at her uncle’s toilet shop. To make such an everyday story as appealing and riveting as she has, Ivy Ho has had to rely on a massive amount of talent as a writer and director.

Wei Tang, who made an enormous impact in Ang Lee’s Lust, Caution (2007), plays against type here as Oi Lin. After making Lust, Caution she faced a ban on appearing in Chinese films. Thankfully after a three-year gap it seems the ban has been lifted. I suspect from here on in, it’s very likely she is about to become a major star. Like the rest of the film, Wei’s character resists glamour. She demonstrates a visible connection with Loy, and as viewers we want her to get together with him, but at the same time her conflicted love for Xu is delivered with such integrity that we never feel her existing relationship is a throwaway obstacle. Oi Lin and Xu’s relationship is typical of the entire movie: again and again, Ho takes a romantic cliché and reworks it into something rich with character and detail.

The film has a strong supporting cast of characters, including Bau Hei Jing as Loy’s domineering mother, Danny Lee (probably still best known for The Killer) as her fastidious and dog-obsessed boyfriend, Mimi Chu as Loy’s devoted and caring aunt. It would be easy to make these characters exaggerated caricatures for comedic effect, but instead Ho gives them real personalities and subplots of their own. Lowell Lo has a small but crucial part as Loy’s dead father, who Loy regularly dreams about. Lo is better known as a composer than an actor (he provided the score to Shaolin Soccer, for example) but he’s warm and engaging, and his presence as a ghostly advisor and confidante gives the film an interesting angle.

There is nothing in Crossing Hennessy that you are unlikely to have seen before. It is a romantic comedy-drama after all, and that brings with it a certain amount of predictable and expected elements. It is Ivy Ho’s treatment of these elements, however, as well as the sterling performances across the board, which lift the production to a higher level. The end result is a highly engaging and warm character drama, and one of the best films of its year. This one comes with my strongest possible recommendation.

This review was originally published on the Eiga: Asian Cinema website.
Posted by Grant at 10:30 PM