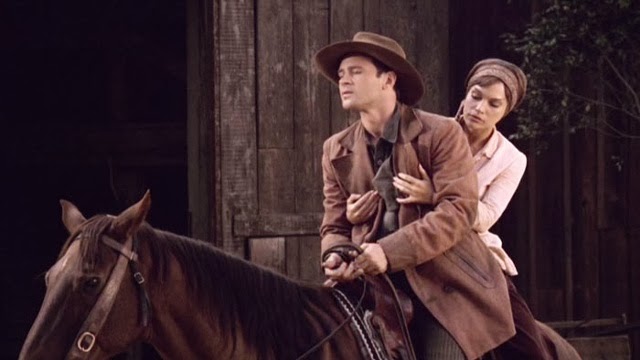 The crew of the Enterprise infiltrate a mysterious colony of humans living in a 19th century civilization within the Delphic Expanse. When they observe the human bigotry towards the alien Skagarans, Archer feels compelled to interfere.

This is the sort of Star Trek episode that generally sets my teeth on edge. The Enterprise is out in an isolated region of space, yet magically discover a human civilization based on the wild west? It's ludicrous. For some strange reason, however, this time it works for me. "North Star" takes its ridiculous premise and gives it a broadly sensible treatment. Aesthetically it works as a solid western. Plot-wise it is by-the-numbers, broadly entertaining Enterprise. As part of Star Trek as a whole, it's a knowing throwback to the original series, where episodes like "A Piece of the Action" and "Patterns of Force" were commonplace.

It's not perfect, of course. For one thing the episode requires us to believe that a 19th century society thrown halfway across the galaxy will not develop new technologies or culture in 300 years. For another, the Delphic Expanse seems a fairly well populated part of space and yet no other civilizations seems to have ever visited before. This is popcorn entertainment, of course, so it's probably best not to over-analyse what's going on.

The guest cast is uniformly strong, including 24's Glenn Morshower as town sheriff MacReady and Southland's Emily Bergl as school teacher Bethany. The regular cast appear to be having a great time playing up western archetypes, particularly Scott Bakula who's rather convincing as the Eastwood-esque stranger arriving in town.

All up this is an entertaining, albeit superficial, episode. It brings the season's quality ratio up to 67%: six good episodes out of nine.
Posted by Grant at 9:30 AM