Star Trek: The Next Generation: "The Last Outpost" 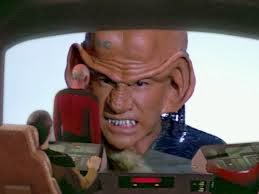 When Gene Roddenberry set about updating Star Trek for The Next Generation he made a conscious decision to put a Klingon on the Enterprise bridge. Lt Worf was a symbol: a sign that the future had progressed, and progress that in James Kirk's day might have seemed unimaginable was now a tangible reality. This caused a new problem, however, because with the Klingons now allied with the Federation some new alien menace was required.

"The Last Outpost" introduces The Next Generation's replacement villains, the Ferengi. In hindsight it was probably a bad idea to hype them in advance, because by the time the episode was broadcast fans seemed to be actively anticipating them. They're built up in advance as well, with an ominous name-check an episode or two beforehand, and descriptions of savage, violent behaviour in "The Last Outpost"s opening minutes. Then they make their on-screen debut, and to be honest everything falls apart.

The problem is this: the Ferengi are silly. They're short, have ridiculous faces and stupid-looking prosthetic ears, and wear scruffy furs when they've been pitched as a dangerous and advanced race of pirates. They crack ridiculous looking electro-whips. They jump up and down whooping and hollering. Any way you slice them, they simply don't work. In future appearances the production team shift away from the dangerous pirate angle to focus on their mercantile trader aspects, as well as broad comedy. This has the unfortunate effect of turning the Ferengi into something suspiciously akin to old-fashioned racist stereotypes of Jewish people, as if there's a very unpleasant subconscious at work somewhere in the corridors of the Star Trek production office.

The episode's other key element is the all-powerful "Portal 69", a humanoid intelligence that tests both the Enterprise crew and the Ferengi for entrance into a long-dead super-empire. It feels highly reminiscent of similar intelligences in original Star Trek episodes, and is another sign that Roddenberry simply didn't have any new ideas for The Next Generation.

Four episodes, and none of them have been good. This is getting rather dispiriting, but I watch on in hope.
Posted by Grant at 8:53 AM