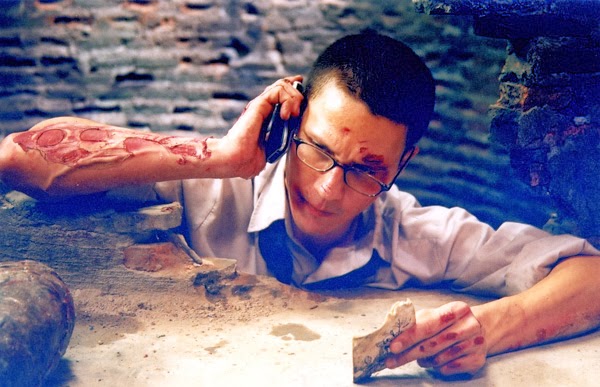 13: Game of Death is a strange movie. Based on the Thai comic book by Eakasit Thairatana, it features an unsuccessful trumpet salesman, Pusit (Krissada Terrence), egged on by a mysterious voice on his mobile telephone to complete thirteen challenges. Each challenge he completes wins him increasing amounts of money. Complete all thirteen and he wins 100 million baht. Quit halfway through and he loses everything. At first the challenges are easy – the first is to use a rolled-up newspaper to kill a fly. The second is to eat the fly. The third is to walk out onto the street and make three children cry. Challenges four to thirteen I will leave for you to discover by yourself.

It is a sensational premise, and one guaranteed to be snapped up and adapted by Hollywood any day now. The execution is pointedly bizarre. While the script would suggest some kind of increasingly tightly-wound horror-thriller in the vein of Saw or Old Boy, the direction and performances work towards an oddly amiable form of black comedy. Every moment of disgust, or horror, or tension is immediately deflated by a funny line, or a hilarious facial expression, or a joke. The result is a schizophrenic viewing experience – the film simply refuses to let its audience know if it is supposed to laugh or cry.

I’m not sure if this makes 13: Game of Death as good a film as it could be. It certainly makes it an interesting film. It’s not often that a film of this nature is so bold about how ridiculous its premise is. It becomes an impossible task to mock or criticise the movie because it appears to mock and criticise itself.

Production values are, like most Thai features, rather scrappy. There’s a distinct ‘seat of your pants’ vibe that I get from all of the Thai films I have seen. They’re clearly made with a much lower budget than the films of more successful local industries – Japan, Korea, China and so on – and this seems to turn them into a kind of loveable underdog. You can forgive flaws and shortcomings that would otherwise annoy because you get the impression that the filmmakers are doing their best and learning as they go. I don’t mean this as a criticism of the Thai film industry – if anything I am impressed they are making films this entertaining.

Krissida Terrence delivers a strong central performance here. Both an actor and a musician in independent band Pru, Terrence gives 13: Game of Death a much-needed emotional core. We barely leave his side for the entire film, and as events take increasingly dark and confronting turns it is important that we have a protagonist to identify with and – much more importantly – a protagonist we can like.
13: Game of Death is not a perfect film. It fails to fully exploit its own set-up, and the second half definitely loses a lot of steam before its oddly rushed climax. The ideas, however, are strong. The film as a whole is solid and engaging. Most crucially it is a lot more interesting than most films you’re going to come across, and that – if nothing else – makes it well worth checking out.
Posted by Grant at 9:43 PM