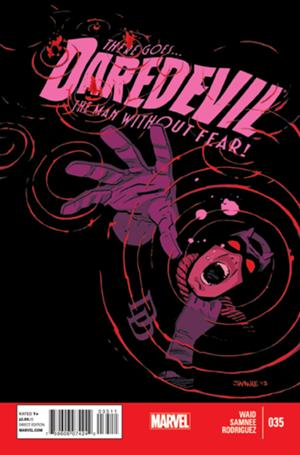 One of the best superhero comics of recent years has been Mark Waid's Daredevil. He managed to take a character that felt creatively tapped out and relentlessly morose and turn it into a fast-paced, dynamic and brilliantly clever monthly serial. With Paolo Rivera and subsequently Chris Samnee the book leaped off the page. It was one of the best-written books of recent years (up there with Hawkeye, Batman and Saga) and one of the best-looking as well.

All things come to a relaunch, however, and so in March Marvel will be publishing an all-new Daredevil #1 - still by Waid and Samnee, but with Matt Murdock relocated to Los Angeles and with a promised 'fresh take' on the character. I had no idea what they were going to do to relocate Murdock from his base in Hell's Kitchen, but the last page of Daredevil #35 manages to make that suddenly and astoundingly clear.

One of the best talents Waid has displayed on this book is an ability to place the answer to a problem in plain sight and then write in such a fashion that the answer only become apparent when you read it. It makes for a wonderfully satisfying comic, and this issue is just as good as the 11 other issues I've given five stars to since August 2012. I can't wait for Daredevil #36. I can't wait for Daredevil #1, either. (5/5) Marvel. Written by Mark Waid. Art by Chris Samnee.

This issue is a very average superhero comic. It's not particularly good or memorable, but it's also not particularly bad. It just sort of sits there: reasonably entertaining but by no stretch a must-read. This title had a very strong narrative direction when it started. Post-"Battle of the Atom" it seems to be floundering. Why are the original X-Men still around in their future? What narrative purpose do they serve? As I said, this issue isn't bad by any stretch, but it is making me wonder why I'm continuing to read it every month. (2/5)

This is another tie-in to the "Gothtopia" storyline, which seems to suffer from the problem that every title that ties in is essentially telling the same story: it looks like Gotham City is bright, sunny and crime free, but it's actually collapsed into ruin and its population drugged and hallucinating their happier reality. This is certainly a better telling of that story that I've seen in Detective Comics and Batwing, but it's still pretty redundant. It does have great art, though, which makes it a more enjoyable read than it otherwise might have been. (3/5)

I am continuing to dig Howard Porter's new art style. Sadly I'm not sure the accompanying script is up to scratch: Giffen and DeMatteis are deliberately echoing the humorous banter that served them so well on Justice League International back in the day (a couple of decades ago, now that I think about it) but this time around they're doing it with characters that aren't anywhere near as likeable. Seriously: there's a team of five reincarnated superheroes and two of them are likeable. The other three I just don't like. And if I don't like them, I don't really care what happens to them. And if I don't care what happens to them, why would I buy issue #3? (2/5)

The second major story arc concludes in a far more satisfying manner than it's enjoyed for the previous instalments. I'm not sure if it was Ron Garney's artwork not grabbing me as much as Esad Ribic's, or if Aaron's script was simply not as engaging as it was for "Godkiller", or even if I just don't care about Malekith the Accursed, but all up this was a pretty underwhelming storyline. The ending, however, was great: complex, ambiguous and full of foreboding for the future. (3/5)

Simon Spurrier's two-year epic races towards its apocalyptic conclusion. There isn't a page wasted in this issue, which sees Wolverine and Cyclops teaming up properly for the first time since Cyclops killed Professor X. Everything is pulling together beautifully, and I'm confident it's all going to end in a month or two with the mother of all climaxes. This has been such a consistently good and entertaining X-book, and it's tragic that it's flown underneath the radar as much as it has. David Haller has been a great character, and whatever happens I hope he's used this effectively in future titles. (4/5)

This issue is pretty much all build-up to its climactic first encounter between the Huntress and Batman. I'm impressed that it's taken almost two years for this book to reach this point, and by holding off for as long as they have they've gifted this meeting with a great sense of importance. Of course they're splitting the meeting up Huntress and Powergirl and Superman and Batman across both this and Batman Superman, and you know how much I adore comic book publishers making me buy issues of new books just to follow the plot of the book I'm already buying. (3/5)