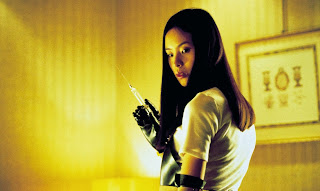 A recent online article about the most disturbing movies ever made sparked a short discussion over at my Facebook page. Conversation focused mainly on Takashi Miike's Audition. I figured this was as good a time as any to reprint my review of Audition from my now-defunct Asian cinema website Eiga. I hope you enjoy it.

Shigeharu (Ryo Ishibashi), a middle-aged widower, is encouraged by his son to start dating again. The widower’s colleague, a successful film producer, devises a plan to find his best friend the perfect girlfriend. They will conduct an audition session for a non-existent film role, and see what young women come along who might be perfect girlfriend – even future wife – material. The widower can then swoop in and romance her. What could possibly go wrong? The answer, of course, is that an awful lot can go wrong, but no amount of foreshadowing can genuinely express how far this cynical act of auditioning girlfriends will take its protagonist. Shigeharu is not by any means a bad person, but his senseless participation in what can only be described as a cattle call receives one of cinema’s greatest karmic punishments.

Eihi Shiina plays Asami, a reserved and quiet woman in her early 20s who becomes the object of Shigeharu’s affections. She is not the woman that she appears to be. It’s a brilliant performance, going to great lengths to portray what is an enormously difficult character for us to understand, or even comfortably watch. She matches the movie: I’m not sure if I’ve seen many films as uncomfortable as the most confronting scenes in Audition.

It’s all the work of Takashi Miike, an inventive director with a vast array of differing films to his credit. He is one of Japan’s most mercurial writer/directors, shifting with ease from gore-filled horror movies to gangland action flicks to low budget arthouse experiments, and even to populist children’s fantasy. Audition is commonly held to be his masterpiece: a shocking and relentless thriller that many find impossible to watch. It’s an assessment that I tend to share. This is without question a graphic and violent film. It may be one of the most graphic thrillers you will ever see. It’s also one of the most memorable. There is an unapologetic boldness at work here that is impossible, once seen, to ever forget.

Some critics have noted the film’s reliance on female stereotype: Asami shifts from the quiet, reserved and idealised cliché of Japanese women to the sort of terrifying ‘bunny-boiling’ mania of the Hollywood female psychopath. Both stereotypes seem drawn to logical extremes here, as if Miike isn’t merely relying on them to tell his story – he’s also directly commenting on how ridiculous they are. If the characterisation is unrealistic or sensationalised, the highly graphic violence most certainly is not. Viewers with a strong constitution may still wish to look away. Those with a weaker resolve may run screaming from the room. This isn’t simply violence that’s gory – it’s violence that visibly hurts.

Audition is one of the trickier films out there to recommend, since while those who respond positively to it generally do so enthusiastically, those who do not generally find it an actively unwanted viewing experience. It’s very much a case of ‘see it if you’re certain you want to see it’, since some things – once viewed – cannot be magically ‘unseen’ ever again.

This review was originally published on the Eiga: Asian Cinema website.
Posted by Grant at 11:39 AM