Star Trek: The Next Generation: "Justice" 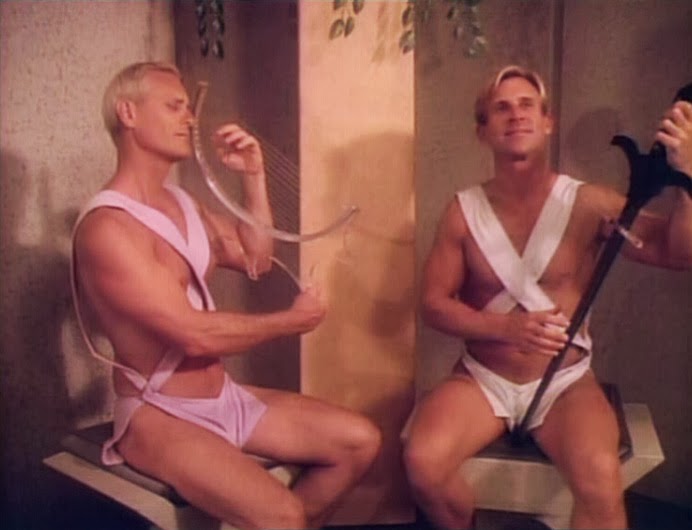 The Enterprise arrives at Rubicon III, where the peaceful inhabitants seem to live an idyllic life of fun, camaraderie and sexual pleasure. When Wesley tramples a flower bed and is sentenced to death, it brings Captain Picard up against Rubicon III's harsh justice system - and the alien intelligence that controls the planet from above.

"Justice" is an episode with a kernel of quality at its centre, in which Picard must choose whether to abide by Starfleet protocols and allow Wesley to die or to save the young ensign but go against his own beliefs - and anger a powerful alien force in the process. That aspect is actually rather good, and certainly Patrick Stewart seems to appreciate the chance to play something a bit more weighty than he's been given so far. Unfortunately this kernel of quality is encased in an inch-thick shell of some of the worst television America produced in the 1980s.

Poor Wil Wheaton gets some absolutely horrendous dialogue that he's forced to chew his way through. My particular favourite - "I am with Starfleet. We don't lie." - has stuck with me since I first saw this episode as a kid. If a 12 year-old boy is noticing the bad dialogue, then there's something dreadfully wrong with the writing. The episode was written by Worley Thorne, based on a storyline by Thorne and Ralph Wills. I was noticed surprised to learn that Thorne had previously written six episodes of Fantasy Island.

This is a terrible episode on an epic level. It actually makes it all rather funny to watch, in a mean sort of way. They must all be so dreadfully embarrassed to look back in it now. I want to console them: it's okay, you didn't know. It's not your fault.

Seven episodes in, two have been good. That drops the quality ratio of Season 1 down to 29%.
Posted by Grant at 10:55 PM