Star Trek: The Next Generation: "Where No One Has Gone Before" 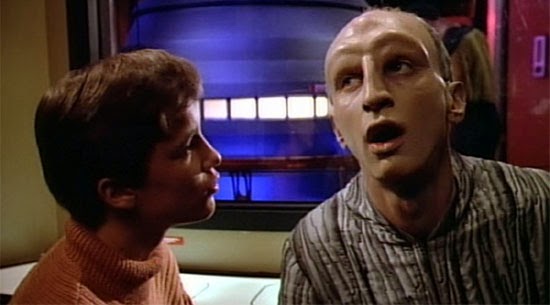 The Enterprise is visited by a Starfleet propulsion expert, the arrogant Kosinski, and his nameless alien assistant. When their attempt to fine-tune the warp drive malfunctions, the Enterprise is thrown almost three million light years across the universe. When they attempt to return to their starting point they instead warp to an unknown region of space entirely, where the crew's thoughts appear to be turning into reality.

Oh thank goodness: an enjoyable episode. "Where No One Has Gone Before" is far from perfect, but it stands head-and-shoulders above the four episodes broadcast before it. It feels quite different to the old-fashioned scripts thus far, and is the first opportunity for The Next Generation to try something new. It also gives Wesley Crusher something interesting to do, and is actually written in a way that doesn't make him look and sound like an idiot.

The big secret is that Kosinski has nothing to do with improving Starfleet's engines - it's his mysterious companion who does it all by himself. He's played brilliantly by Eric Menyuk, who shares some really nice moments with Wesley. In fact Wesley's actions here earn him a field promotion to acting ensign, a clever move that allows him to feature in future episodes more readily.

Check out the new Chief Engineer, Mr Argyle: he'll be back one more time before vanishing as mysteriously as his predecessor. Also check out director Rob Bowman, who makes his debut here. He'll go on to direct a bunch of episodes of the series, but more importantly he goes on to be one of the key directors of The X Files. Maybe it's my imagination, but this episode looks a lot more like late 1980s television and a lot less like the Star Trek of the late 1960s.

My only significant criticism is that the story lacks tension for what should be an utterly terrifying situation. It exchanges that for a sense of wonder, but in 45 minutes there's only so much slack-jawed gaping at flashing lights that an episode needs.

Altogether, however, this is a good episode. With four bad episodes before it, however, that still leaves Season 1's quality ratio at a disgraceful 20%.
Posted by Grant at 12:32 PM