Who50: "Revelation of the Daleks" 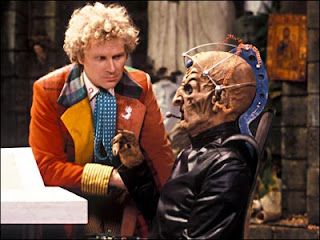 Who50 counts down to the 50th anniversary of Doctor Who by reviewing my favourite episodes and serials over the history of the programme, counting down from #50 to #1. Today, #25: "Revelation of the Daleks", a 1985 four-part serial written by Eric Saward and directed by Graeme Harper.

The Doctor (Colin Baker) takes Peri (Nicola Bryant) to the icy planet Necros, where the body of his old friend Stengos is said to be lying. Instead he finds an intergalactic funeral home under mysterious new management, a problem of disappearing corpses, and an old enemy lying in wait for him.

"Revelation of the Daleks" is a bleak and violent satire, coming as the finale of a season typified by being bleak and satirical, and by being particularly and graphically violent. The season begins with a man's hands being bloodily crushed by Cybermen and continues through hideous acid burns, mock executions, cannibalism, stabbings, and all manner of actions and consequences both graphic and distasteful. In some cases this horror works remarkably well, but in others it feels sensationalistic and more than a little tacky. In the case of "Revelation of the Daleks" I feel the horror works perfectly. It very likely contains some of the most effective uses of violence in Who history.

Of course the mysterious new owner of the Tranquil Repose is mad Kaled scientist Davros, taking terminally ill patients out of cryogenic storage and converting them into a new species of Dalek. Bodies that are not of direct use to his operations are being converted into food to feed the starving masses of the galaxy and earning Davros much-needed funds. If "The Two Doctors" was confrontational through its presentation of cannibalism, "Revelation of the Daleks" takes things one step further: half the galaxy's humans are now cannibals and don't even know it.

One scene in particular sees Stengos' daughter, who has come to Necros to find him, discovering his severed head inside a glass Dalek casing. His face is barely visible because his flesh is transforming into that of a Kaled mutant. It's a horrifying sight - and then the severed head wakes up and starts shouting. Ultimately Stengos persuades his own daughter to murder him before his transformation is complete, and it is one of the most disturbing and horrific moments in Doctor Who's entire 50 year history. Even rewatching it today I find it bizarre that the production team was able to get away with something so edgy in a family TV drama.

This episode is rich in supporting characters as well, notably William Gaunt's tragic Count Orsini, Clive Swift's vain Jobel, Alexei Sayle's DJ, Eleanor Bron's Kara and Jenny Tomasin's tragically obsessive Tasambeker. I'd go so far as to claim this serial possibly has the strongest guest cast of any Doctor Who story ever recorded. If there's a criticism to be levelled at the story, it's that the Doctor isn't central to the story, but when the guest stars are as entertaining as they are here that doesn't seem to matter so much.

And, with this serial, Colin Baker's tenure as the Doctor vanishes from this top 50. I only included one other Colin Baker story in these rankings: "Vengeance on Varos" at #40. This period of Doctor Who suffered an overwhelming number of problems, and this sadly affected its chances of getting too many stories onto my list. I think Colin Baker was very poorly served by the scripts during his time on the series, thanks in no small part to Eric Saward's script editing. Thankfully a long series of audio dramas by independent producer Big Finish has gone a long way to demonstrate what a fabulous Doctor Colin Baker actually was.
Posted by Grant at 8:05 PM