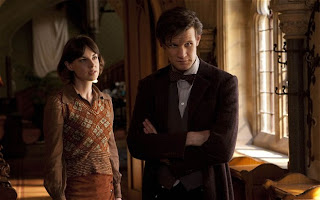 One of the more perennial obsessions with Doctor Who fans is viewing figures: I think ever since the series was axed in 1989 for poor ratings - and they really were very poor - fans look to any fluctuation in viewing numbers as a sign that their favourite television drama is in danger of getting axed.

The latest fear seems to be that ratings under Steven Moffat have nosedived, and that things were so much more popular under previous producer Russell T Davies. I figured it was worth taking a quick look at those stats and see if this was true. 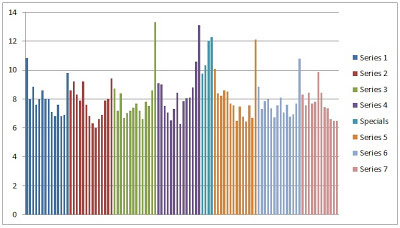 So there you go: all seven series of Doctor Who to date (minus the last two episodes of series 7, of course), and it's immediately apparent that - all things considered - ratings have actually been pretty darned consistent since 2005. There are variations, and as you can see the Christmas specials have a tendency to spike pretty heavily, but all in all it's a pleasingly consistent audience.

Now it's possibly to point to series 7 and note the sharp fall in ratings in recent weeks, but you can also point to series 2 and see the same thing - and look where David Tennant's ratings finished up.

Just to be sure, I took out the Christmas episodes and the David Tennant specials, and calculated the average number of British TV viewers who watched each season. You wind up with this:
Hardly cause for alarm, but I suppose after the wilderness years of 1989 to 2005 Doctor Who fans have a tendency to get jumpy. To reassure them for at least one more year: series 8 is in pre-production as we speak.