Doctor Who: "The Name of the Doctor" 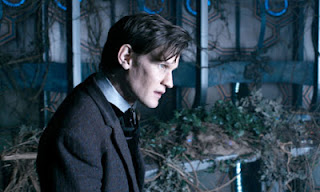 This review of "The Name of the Doctor" spoils significant elements of the plot. If you haven't yet seen the episode I strongly recommend that you watch it before reading anything else about it.

There is a constant problem with Doctor Who, a problem that has plagued the series since its revival in 2005 and continues to plague it after seven full seasons. It's an issue that has pretty much single-handedly ensured that while I continue to adore the original series that ran from 1963 to 1989 I only really enjoy the second series post-2005.

The issue is this: modern Doctor Who is remarkably good at making emotional sense. A lot of time is given over to how the characters feel, and react, and develop. In terms of depth and nuance it is light years ahead of the original series. On the other hand, and this is the problem, the series is not very good at making logical sense. Put simply: the plots are nonsensical. Too much goes unexplained, or gets hand-waved away, and episodes are more prone to wrapping up thanks to some emotional "clap-your-hands" mumbo-jumbo than they are to the Doctor coming up with a clever plan and outwitting his opponents.

"The Name of the Doctor" is a classic example of this. Emotionally speaking, it's close to perfect. Narratively speaking, it's a bunch of old cobblers. Who knows what was actually going on? I don't. I'm going to hazard a guess that you don't. Maybe head writer and executive producer Steven Moffat does, but to be completely honest I doubt that he does. This isn't a show that thinks any more - it's a show that feels.

That's pretty much the episode in a nutshell: a string of unexplained incidents that exist to provide an emotional impact but don't actually make any sense. Actually that's unfair: there's a solid chance that, had the episode paused to explain anything then some if it would make sense. Moffat never gives us that chance.

Of course once we move beyond the inexplicable plot there is much in "The Name of the Doctor" to recommend. Matt Smith delivers a wonderful performance here, particularly when he first hears the word "Trenzalore" and can't help but well up with tears. Madame Vastra and her chums are back, and each gets their own moment to really shine - whether it's Strax's adventures in Glasgow or Jenny's fabulous moment of horror early into the episode ('I think I've been murdered'). River Song gets what really feels like - and what I personally hope is - one final appearance in the series. The Whispermen are a great new villain, although they are hampered somewhat by not actually being explained in the slightest: is this what the Intelligence uses now instead of snowmen or Yeti?

Since when has the Intelligence been able to time travel? It captures Vastra and company from 1893 London, but wants revenge against the Doctor for all of the times he's defeated it - which in 1893 comes to a sum total of once. The Doctor may thwart it in 1920s Tibet and 1960s and 2010s London, but surely that's all in the Intelligence's future? It, like much of the episode, made no sense.

Of course the episode is ultimately going to be remembered for two reasons. The first is the jaw-dropping opening and climactic sequences, in which Clara is broken up across the Doctor's entire lifetime - leading to a montage of scenes with Jenna-Louise Coleman digitally inserted into old Doctor Who adventures. She sees Sylvester McCoy in "Dragonfire", Tom Baker in "The Invasion of Time" and Jon Pertwee in "The Five Doctors". The boldest choice of all is to place her on Gallifrey during the first Doctor's escape with a stolen TARDIS. It's the sort of scene you'd never expect to see put on television, and yet there it is. Apart from being a monumental scene in general, it also establishes two things. Firstly, it cements the fact that Susan is definitely the Doctor's granddaughter and is definitely from Gallifrey. Secondly, it looks like even on Gallifrey the Doctor liked wearing clothing from Earth. Clearly he was a fan of the planet from the outset - probably because that's where his mum's from. 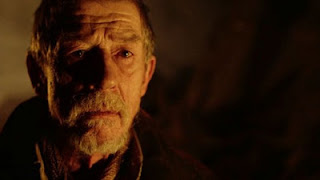 Then there is the episode's much-discussed final scene, which throws possibly the most gigantic creative spanner into the series ever. The Doctor rescues Clara from his own time stream, a sort of dreamlike rocky mountainside where all of his former lives run about from one adventure to another. In the middle of it all stands someone else: another Doctor, one we've never seen before and who has never previously been hinted at. It's John Hurt, legendary actor, in Paul McGann's waistcoat and Christopher Eccleston's coat. Cue credits, and the biggest cliffhanger in Who since Derek Jacobi regenerated into John Simm.

I think we all previously assumed that Paul McGann's Doctor must have ended the Time War, and regenerated into Christopher Eccleston's ninth Doctor as a result. Now it appears that it was the Hurt Doctor (what a fabulously appropriate name) who pressed the button, committing genocide on billions of people and forever losing his right to call himself the Doctor. Matt Smith may still be the 11th Doctor, but he's a man living out his 12th life. This is a staggering act of creative bravado, putting an entirely new spin on the character and leaving me desperate to see what happens in November's 50th anniversary special.

And what a clever twist Moffat has made. We spent the entire lead-up to this episode thinking the title referred to the Doctor's real name, and what terrible secret it might hold. It turns out it's not the name that's the awful secret, and it's not the Doctor's birth name that the title refers to. It's a moment so beautifully staged, and so utterly surprising, that it left me adoring this episode. I watched it twice in one day, which is something I hardly ever do.

Doctor Who may still be a series that sacrifices plot for emotional moments, but when the moments are as effective as the one depicted here? Sometimes I honestly don't mind that much. Season 7 ends with 12 good episodes out of 14, or an overall season score of 86%. Roll on November.
Posted by Grant at 9:28 AM