Fun with Stats: Who's the longest-running companion? 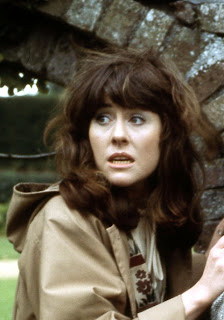 Somebody asked me, after I posted a ridiculously excessive set of bar charts about which of the 11 television Doctors was actually the longest-running one, if I could tell them who the longest-running companion in Doctor Who was. Certainly we can probably name the most popular of the companion: Sarah-Jane Smith is almost certainly the consensus choice, and there have always been viewers keen on Jamie McCrimmon, or one or the other of the Romanas, or even more recent companions like Rose, Donna or Rory.

As with the Doctors, I've looked at who's the longest-running companion by three measures. Firstly, by the number of serials or stories they appeared in. Secondly, by the actual number of episodes they appeared in. Finally, the time in days between their first appearance and their last appearance. A few notes: I have not included return appearances for companions prior or subsequent to their initial departure from the series; one-episode companions like Grace Holloway or Wilf have been excluded; for Nyssa I have included her guest appearance in "The Keeper of Traken" for her total; I have separated both Romana and K9 into two separate characters each.

So: who is Doctor Who's longest-running companion? 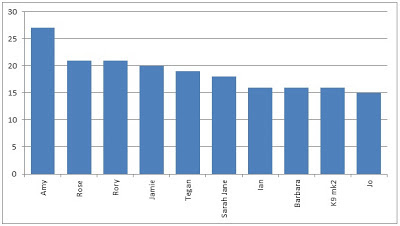 If we go by the number of stories, it's actually Amy Pond by a fairly solid margin. Like all new series characters, she benefits from most of the episodes being self-contained thus inflating her total compared to all the original series companions who had to make do with serials. This in mind, it's not a surprise that Rose and Rory come up in equal second place. The first original series companion to get a look-in is Jamie, followed by Tegan, Sarah-Jane, Ian and Barbara. 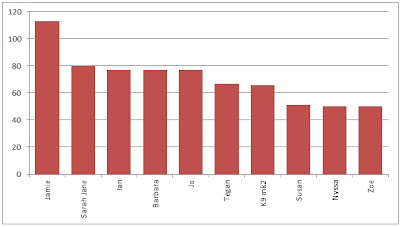 The opposite is generally true if we judge the longevity of a companion by the number of actual episodes they starred in. Here it's Jamie McCrimmon who's the longest-running companion, having fought by the Second Doctor's side for 113 episodes over three seasons. Sarah-Jane is second, followed by original companions Ian and Barbara, and then Jo Grant. As you can see, no new series companions makes the Top 10 by this measure. 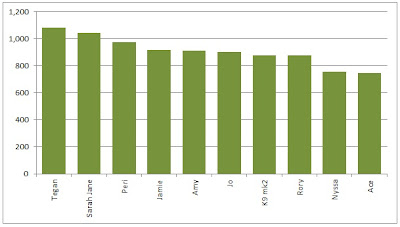 So what about the number of days in the role? In this case it's actually Fifth Doctor companion Tegan Jovanka who pops into first place, having featured in at least part of four seasons from Tom Baker's final adventure to two serials shy of Peter Davison's swansong. Sarah-Jane is the second-longest running, followed by Peri (thanks to an 18 month hiatus), Jamie, Amy and Jo.

So there's your answer, or to be more specific, there are your answers: it's Amy Pond, Jamie McCrimmon or Tegan Jovanka.

That said, I'm sure if I added in the companions' appearances in novels and audio dramas, we might get even more candidates again.
Posted by Grant at 8:55 AM