Books of May: Them!: Adventures with Extremists, by Jon Ronson (2001) 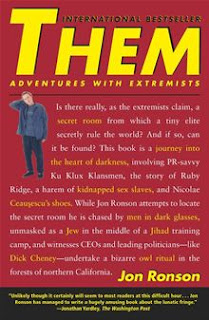 Books of May highlights books - both fiction and non-fiction - that have engaged, entertained or otherwise made a significant impact on me over the years. The goal is to highlight one book a day for the entire month. Today, book #9: Them!: Adventures with Extremists, by English journalist Jon Ronson.

Jon Ronson is a fantastic English journalist whose radio and television documentaries combine both fascinating reporting with a remarkable sense of humour and absurd. His most famous book is probably The Men Who Stare at Goats, which was adapted into a popular feature film starring George Clooney, but I still think his best book is Them! which was published in 2001 as a tie-in to his documentary series The Secret Rulers of the World.

The book basically recounts Ronson's encounters with a string of extremists and conspiracy theorists around the world. As he goes he begins to actively follow the mysterious Bilderberg Group, as several conspiracy enthusiasts have cited that group as the one that secretly rules the world.

Parts of the book are laugh-out-loud hilarious. Other parts are genuinely insightful into the mindset of the extremist or the conspiracy theorist. Even more sections are simply disturbing or actively frightening. It's an eye-opener, however, particular if read in tandem with Murakami's Underground (which I profiled a short while ago).

I'm pretty much onboard for anything Ronson writes and records - if you haven't had the pleasure of encountering his work, hunt something down as soon as he can. He's absolutely worth it.
Posted by Grant at 12:14 PM