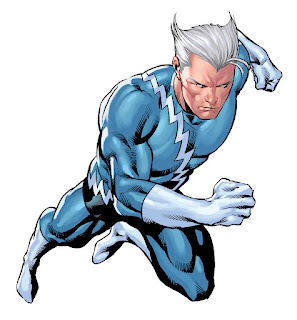 I was intrigued this weekend to see a new development for two upcoming superhero sequels: X-Men Days of Future Past and The Avengers 2. Bryan Singer has confirmed that the Marvel superhero Quicksilver will be appearing in X-Men, while Joss Whedon has confirmed that Quicksilver - and his sister the Scarlet Witch - will be appearing in The Avengers. One film's a Fox production, the other a Marvel/Disney one.

How is this possible? Well both Quicksilver and Scarlet Witch have been sitting in a sort of legal limbo for more than a decade, because while Marvel Studios retained film rights to the Avengers, they sold off the film rights to the X-Men a long time ago. Both Quicksilver and Scarlet Witch are members of the Avengers, so you'd think their rights would sit with Disney, but of course they're also mutants and the children of Magneto, so you could argue they're morely likely to be owned by Fox.

It's not clear yet whether (a) there's going to be a legal stoush, or (b) that both Disney and Fox can use these characters, or even (c) that they'll use the same actors in the roles in an unofficial bit of cross-corporate synergy (doubtful). It has, however, intrigued me. Let's see what happens.

The team-up of bounty hunter Jonah Hex and time-travelling hero Booster Gold continues as they challenge a Mexican death cult to retrieve a chest of stolen gold. I sing this book's praises each and every month, but what really struck me this issue was just how wonderful Moritat's artwork is. There's a lovely soft style to this book that enhances its 19th century feel and makes it stand out sharply from the rest of DC's New 52. The steampunk Stormwatch backup is entertaining but unnecessary - I really do wish DC would scale back on the $3.99 books and just keep the whole line at the $2.99 mark. I'm not getting a dollar's worth of value from the extra content. (4/5)

It must have been a last minute decision to slot this fill-in issue into the schedule, because despite being written by John Ostrander with pencils by Manuel Garcia it's still got Geoff Johns and Paul Pelettier listed on the cover. So yes, this issue is a fill-in, which means that we get an entirely skippable side adventure for the Others, Aquaman's old pre-Justice League superteam who aren't particularly interesting. I do wonder: was it worth publishing this issue, or could we all have simply missed out on Aquaman for a month? (2/5)


Another delayed DC book sees another fill-in issue in one week. To lose one book looks like misfortune; to lose two looks like carelessness. This self-contained one-shot follows the adventures of the Batman of Japan (is he still the Most Excellent Superbat? I'm not certain he's actually named in this issue) and his sidekick Canary. It's written by regular artist Chris Burnham and is a breezy, relatively entertaining read - although, like Aquaman, you could easily miss it without a worry. This book does provide an interesting glimpse into what Batman Incorporated wold be like if it actually focused on the various international Batmen. Certainly this is good enough that DC might consider keeping both Burnham and the title running once Morrison completes his epic Batman arc in two issues. (3/5)

It's been a long time coming, but with this issue Matt Murdock finally comes face to face with the elusive criminal who's been pushing him over the edge. I wouldn't dream of spoiling the surprise, so let me instead concentrate on this issue's tight plotting, and brilliant layout and art - all of which works to create one of the most suspenseful and tense comic books I can remember reading.The only downside is that, and I really hope this is a once-off and not a continuing plan, the book is a dollar more expensive than usual with a needless backup strip of Foggy Nelson visiting a childrens cancer ward. (4/5)

Two issues in a row now we've been promised a confrontation between Barry Allen, and two issues in a row that confrontation hasn't arrived. This is the first part of a new six-issue arc, however, so I suppose the Reverse Flash will be running along soon. This continues to be a beautiful comic. There's such a graceful, soft look to Manapul's art. It impresses me every time. (4/5)

Geoff Johns wraps up his lengthy run on Green Lantern (more than 100 issues) with this special length finale. It is a fantastic book, bringing to a close an epic storyline that has expanded and enhanced the Green Lantern franchise more than any other writer in the character's history. What's more, this book feels like an honest-to-god end - you could quit after this issue and never read another Green Lantern comic again. They don't allow creators to sit on the one title for this long any more, and Green Lantern has been a rare and valuable exception. Good on DC for acknowledging the phenomenal impact this book has had over the past decade, and good luck to the new creative team who have a hell of an act to follow. (5/5)

Art Baltazar and Franco have been produced some of the finest all-ages comic books through books like Tiny Titans and Superman Family Adventures. Now they're tackling the DC Universe proper with this unexpected relaunch of one of DC's more obscure bits of IP: a team of teenagers without superpowers of any kind, nor any Batman-style training, trying to become superheroes simply by throwing money at the problem until it's fixed. This is a very solid and intriguing first issue: the challenges will be for Baltazar and Franco to make us care about a bunch of spoiled rich kids each month, and for this book to attract enough readers in the long-term. Like The Movement, which also launched this month, this is a $2.99 book, and I'm hoping the lower price point will give it a chance at lasting more than eight months unlike more expensive books like Sword of Sorcery and Threshold. (4/5)

I don't know Beta Ray Bill. I know that he's a space-travelling, horse-faced alien that dresses like Thor, but that's pretty much the extent of it. Anyway he turns up at the end of this issue. The bulk of the book is delightfully dedicated to women talking: this issue passes the famous Bechdel Test by a country mile. Sif and Gaia, Sif and Frigga, Sif and Jane Foster... it's still rare enough that a supercomic is filled with women that it's a noticeable thing when it happens. This is a great issue of an increasingly great comic book. (4/5)

This is a book that haunts you. I keep reading an issue, and immediately feel underwhelmed, but then slowly realise I'm still thinking about it. This isn't a traditional style of comic: it's quite text heavy, not in terms of dialogue - which is sparse and to the point - but in terms of old-fashioned narration. With this issue we reach the end of the first year. The chaotic world Wood has created seems pretty clear, the characters are established, and the Massive remains maddeningly out of reach. This is a real slow burn, but the long-term rewards are becoming obvious. (3/5)

This continues to be the most Vertigo-style comic that Vertigo isn't publishing; a book that could happily sit alongside Preacher, 100 Bullets and all the other classics down at the scabbier, meaner end of DC's mature readers line. Instead its over at Image, the company that's now regularly doing Vertigo better than Vertigo can. It's menacing, filled with strong characters and deeply effective horror. More people should be reading this book. This book should be huge. (5/5)

It's taken three issues, but this book now seems to have found its focus and is setting up for a sensational run. I like that, unlike the previous version of Legacy, this book features a relatively ordinary, non-superpowered protagonist and not yet another self-doubting Jedi. The fact that her sidekicks are a nervous Mon Calamari (think Admiral Ackbar) and an IG-88 assassin robot is just icing on the cake. There's some brilliantly Star Wars-esque action in this issue, particularly a high speed starship chase through a series of enormous mining tunnels. Great stuff. (4/5)

There's a bit of a problem with this comic, which is that it assumes you read Uncanny Avengers and therefore know what everybody's talking about during the issue's climax. That aside, this continues to be a great book. David Haller is a much more interesting mutant than many other X-Men, and the book does a great job of showing how his solo investigations are so much more effective and useful than a lot of the running around, shouting and fighting that the more famous Marvel Universe mutants do. (4/5)

This marks the end of the first story arc and, significantly, provides the final answer to what's up with Loki these days. Readers who followed the character in Gillen's superb Journey into Mystery know that the bright, optimistic Kid Loki died with his soul replaced by the original evil villain Loki. Turns out he's now trapped in a very similar situation to Otto Octavious over in Superior Spider-Man. This could get interesting. This is a sensational must-read superhero book, rich in tone and humour and featuring great characters. It's the first bona-fide must-read of 2013. (5/5)

Winner of the Week: Green Lantern. A stunning end to a massively significant run.
Loser of the week: Aquaman. While Johns was off completing his Lantern run, his other title was sadly left to flounder for a month.
Posted by Grant at 7:35 AM