Fun with Stats: Who's the longest-running Doctor?

Ask any Doctor Who fan, and the answer to this question is obvious: clearly, after seven seasons it's Tom Baker. The problem is this: how do we measure the length of a particular Doctor's tenure? We could, for example, do it the easy way with the number of televised seasons each actor starred in as the Doctor. 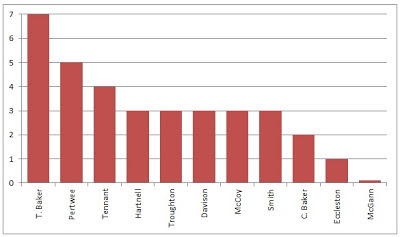 This first table ignores the fact that William Hartnell was still the Doctor for the first two serials of Season 4, and that Colin Baker was the Doctor for the final serial of Season 21. I've also given Paul McGann a little blip: he's there, but he only played the Doctor for a single TV movie, and not a full season of any kind. Finally, I considered the four specials starring David Tennant between April 2009 and January 2010 to be a very short season. These results are pretty much what Who fans are familiar with: Tom Baker is the longest-running Doctor, followed by Pertwee, then Tennant, then a pack of five Doctors before the list rounds out with Colin Baker at two seasons, Eccleston at one, and poor old McGann at one bit.

There we go. Done and dusted. Or is it?

What if we looked at it in terms of the number of days in a row an actor performed the role of the Doctor? 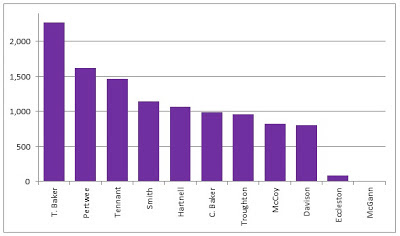 Again I've made a few assumptions, the main one being that Sylvester McCoy's tenure as the Doctor ends with "Survival, Part 1" in 1989 and not with the TV Movie in 1996.

Now if we look at things this way, sure Tom, Pertwee and Tennant remain the top three longest-running Doctors, but we're able to break up that deadlock of five three-season Doctors. Suddenly Matt Smith jumps up to be the fourth longest-running Doctor, with Hartnell in fifth place, and Colin Baker outlasting Troughton, McCoy and Davison thanks to the 18th month hiatus in 1985-86. This second one interests me because there's a common attitude that the new series is burning through lead actors at a faster rate than the old series - and as with yesterday's ratings post it turns out this is a fan assumption that isn't actually true. 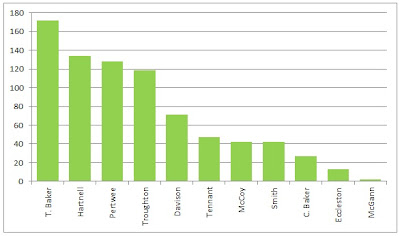 Is the number of days in a row really the best measure either? Maybe we should simply look at the number of episodes each Doctor starred in?

So: Tom Baker is still the longest-running Doctor, but William Hartnell has made a sudden leap from 5th place to 2nd. Troughton's jumped from 7th place to 4th. Matt Smith drops from 4th place down to equal 7th alongside Sylvester McCoy. Hartnell and Troughton arguably get an unfair advantage using this criterion, because for the first six seasons of Doctor Who they made a significantly higher number of episodes per year.

So maybe we should look at it in terms of stories: a six-part serial from 1966 gets treated as the same size as a single episode story presented in, say, 2005. How will that shift the numbers around? 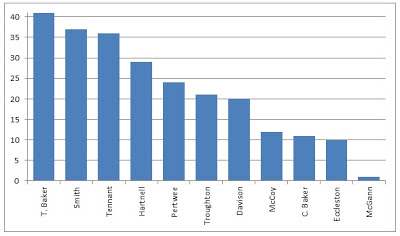 This is the areas in which the new series Doctors really take off: Matt Smith jumps all the way up to 2nd place, Tennant just behind him. While Eccleston remains the Doctor with the second-shortest tenure, he's creeping up very closely behind Colin Baker and McCoy.

So there we go, Tom Baker is - as you might expect - the longest-running Doctor, but Matt Smith's a close second - and if he does indeed perform the role of the Doctor for a fourth season he'll probably become #1.

But not so fast! What about the novels? When Doctor Who  as a series went off the air from 1989 to 2005, it didn't simply die off as a franchise. There was a highly regarded range of original novels published by Virgin Publishing Ltd, and once the TV movie aired the BBC took over the line themselves. Sure they're not television stories, but ask any fan of the Virgin New Adventures whether or not they're canonical and you'll generally get an answer in the affirmative. It's probably for the best that we incorporate those stories into our graph. 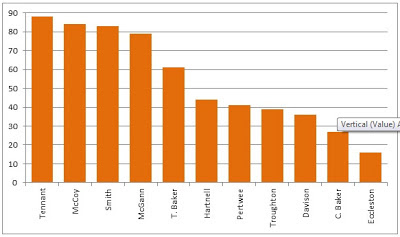 For the purposes of this graph I including Virgin's New and Missing Adventures, the BBC's Eighth Doctor and Past Doctor Adventures, the Telos novellas, and the post-2005 BBC Books range of original novels featuring the 9th, 10th and 11th Doctors, as well as a string of one-off hardcovers, two-in-one novels, exclusive audio books and assorted other narratives.

And suddenly Tom Baker isn't the longest-running Doctor any more. Thanks to a truckload of little hardcover novels, David Tennant is the longest-serving Doctor of all time, followed by Sylvester McCoy (thanks to the New Adventures), Matt Smith and Paul McGann (thanks to the Eighth Doctor Adventures). That pretty much puts the 'running through new Doctors too fast theory to bed: between them the three new series Doctors account for 31% of the 598 televised and literary adventures out there.

Wait a second: if we're including the novels we really need to include audio dramas as well. There were radio plays and serials, and of course an enormous number of direct-to-CD and download productions from Big Finish. We should probably pop them in too - just to be fair. 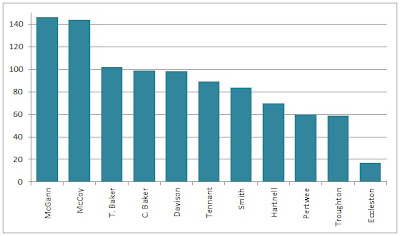 Aha! So it's actually Paul McGann who's the longest-serving Doctor. He's starred in one television movie, but 145 novels and audio dramas. Truly he is the dark horse of the Doctor Who saga, creeping up when nobody's looking and starring in the greatest number of stories of any individual Doctor.

Sylvester McCoy's the 2nd longest-running, and Tom Baker finally gets back up and rounds off the top three. Poor Christopher Eccleston's almost guaranteed to be last for the rest of time: just 17 stories between TV, a handful of novels and a sole audio book coming in September.

So the next time someone asks you who the longest running Doctor is, remember: it's Paul McGann. Or David Tennant. But probably really Tom Baker.
Posted by Grant at 11:16 PM