Doctor Who: "Nightmare in Silver" 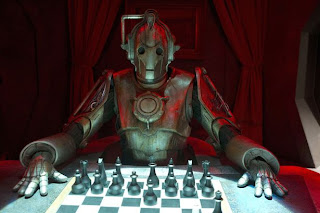 The Doctor takes Clara, Angie and Artie to an intergalactic theme park in the far future, only to discover it has closed down. He finds a few remaining entertainers there, as well as a squadron of incompetent soldiers, some weird insects and one of his oldest and most dangerous foes.

Neil Gaiman returns to Doctor Who with "Nightmare in Silver", his second Doctor Who television script and his first since his widely (but not universally) loved Season 6 episode "The Doctor's Wife". Also returning are the Cybermen, who are pretty much my favourite Doctor Who monster.

I can't help but feel that this was an episode I felt I was supposed to like, rather than an episode that I actually liked. Actually that's a little unfair, because all things taken together I did ultimately enjoy "Nightmare in Silver". I simply didn't enjoy it as much as I felt that I should have.

Part of this episode's stated goal was to make the Cybermen scary again. I always have a mild problem when people attempt this sort of thing, because they often misinterpret what makes people scary in the first place. For one thing, being more elaborate is not scary: a super-fast 'bullet-time' Cyberman is a surprise, definitely, but it isn't scary. A Cyberman that can remove its head as a distraction isn't scary either - it's actually slightly silly. A Cyberman that removes its hand, which then scuttles about like a hand-shaped robotic spider, is so silly they already used the gag in an episode of Red Dwarf.

On the other hand, a mass of Cybermen stamping relentlessly towards Clara and the soldiers, calmly telling them they will survive and live on as Cybermen, is damned scary. When they all suddenly shut down and remain very still, like statues, that is scary. Crucially, these sorts of things are exactly what have made Cybermen scary since 1966. They're inhuman, emotionless, unstoppable and will make you like them. All of the other flourishes and twists Gaiman provides to them are entirely unnecessary and potentially counter-productive.

Some of the new elements do work. The Cybermites are brilliant, and brilliantly creepy. Doubling Matt Smith up as the Doctor and Cyberplanner gives the episode a visible, engaging sort of villain. The new Cyberman design is great, as are their new voices - provided once again by Who stalwart Nicholas Briggs. There are also a bunch of nice Gaiman-esque touches, from the inclusion of a Cyberman as the Turk (an 18th century mechanical chess player that wound up to be a fake) to the wonderful Chess visual metaphors as the Cybermen advanced upon the castle.

I was particularly impressed by Warwick Davis' performance as Porridge. I've always been a fan of Davis, particularly his starring performance in Willow (1988), but there was a maturity and a nuance to his acting here that really stood out. I would be very happy to see his character return in the future.

I can't pretend I wasn't a little bit disappointed, but at the same time I'm not going to pretend this episode wasn't very good. I just feel it could have been a lot better. Still, that's a tick of approval from me, giving Season 7 11 good episodes out of 13 (85%), with one more to go. Let's hope it's a good one!
Posted by Grant at 10:44 PM