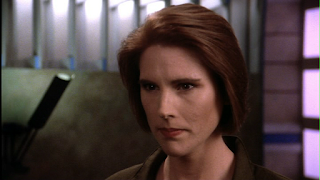 Lyta Alexander, Babylon 5's original telepath, unexpectedly returns to the station. She is on the hunt for a PsiCorps sleeper agent: it could be any member of the command crew, and thanks to PsiCorps brainwashing they wouldn't even be aware they are a spy.

"Divided Loyalties" is a weird episode in so many respects. I kept wanting to like it, and it constantly evaded any attempt I made to do so. It feels like it should be a bold, provocative game changer: an episode with actual consequences, and permanent change to the series status quo. Instead it feels more than a little like an extended episode of Scooby Doo. Who is the mole? Well it's actually really obvious to anyone who watches much television, as if Straczynski looked around his cast for the most redundant character in the show and kicked them out of the nearest exit.

So Talia Winters is revealed to be a secret PsiCorps mole, and leaves the series for good. I'm not surprised. It's become really obvious over the course of the first two seasons that there really isn't a need for a permanent station telepath in Babylon 5. Andrea Thompson is credited in all 44 episodes of Seasons 1 and 2, and appears in only 17 of them. Of those 17 episodes, only seven are in the second season. She's had nothing to do, and I imagine Thompson was crawling up the walls looking for a more interesting acting gig (and she got one, of course, playing Jill Kirkendall in more than 70 episodes of the considerably more prestigious NYPD Blue.

If you think about it for more than ten seconds Talia is a really stupid choice for the PsiCorps to use as a secret agent. If you're hiding information from the PsiCorps, why would you share that information with Talia Winters - a PsiCorps commercial telepath? It's like fighting Nazis but still inviting Herman Goering to your dinner parties at the same time. A quick search on the Internet reveals that in Straczynski's original plan the mole was going to be first officer Laurel Takashima, but as that character didn't return after the TV movie a replacement was needed. If it was me I'd have made it Ivanova. Imagine how much more shocking that would have been. As it happens, using Talia means that a whole raft of plot development in Season 1 - Ironheart gifting her with new powers, Kosh somehow manipulating her for unknown purposes - are dropped by the wayside and abandoned.

Pretty much the emotional core of this episode is the romantic relationship with Ivanova and Talia, and its subsequent destruction as a result of Talia's cover being blown. This is genuinely weird: the characters have gone from distrust and resentment to forging a peaceable working relationship, and now to a full-blown romantic and sexual tryst. It would be fine, even fascinating, plot development had it been remotely developed before this episode. It almost feels like Straczynski got to this episode, realised that Talia didn't really have any close friends or associates on the station whatsoever, and simply made one up to give the episode some weight. It's quite sad because a romantic relationship between two women, one a telepath and the other distrustful of telepaths, is enormously fertile ground for a writer - and Straczynski introduces it specifically at the point where he can no longer write that story. Talk about poor timing.

I really wanted to like "Divided Loyalties", because on a superficial level it seemed like the sort of episode I should be rewarded. Unfortunately while the concept was a winner, the execution was not. This one gets a 'no' vote from me, leaving Babylon 5's second season at 11 good episodes out of 19, or 58%.
Posted by Grant at 10:09 AM