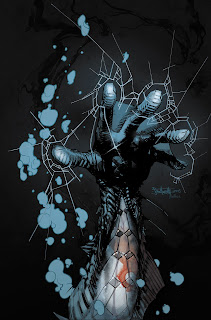 This is how it works: each comic book publisher generally operates on a four-week schedule. This is particularly true of DC and Marvel, who of course account for the vast majority of the USA's more popular comic books. So in the first week of each month DC will publish Action Comics, in the third week they're always publish Batman, and so on. That's all fine and dandy, until you come up to a month like May 2013 - which has five Wednesdays in it.

Usually this is an excuse for a big cross-over event, something favoured by DC in particular. This week, they've instead focused on publishing a bunch of special-length annuals based on a pile of comics I don't read: Red Hood and the Outlaws, Earth 2 and so on. As a result, this column - which usually features about ten comics each week - only has three books in it. I'll do my best to say a bit more than usual about them, then.

Under the cut: reviews of Doctor Who: Prisoners of Time, The Wake and X-Men.

Doctor Who: Prisoners of Time #5

My copy of Prisoners of Time #5 came with a cover by Dave Sim. That's weird. Dave Sim is, of course, best known for his 300-issue opus Cerebus - a comic that started as a Robert E. Howard parody that rapidly segued into an intellectual satire before finally shifting in its final arcs to a strange manifesto on the evils of women. Subsequent projects have failed to sell very well for Sim (possibly because he lost 50% of his potential audience by writing a manifesto on the evils of women), but it seems a very harsh drop from 'significant icon of comic book independent publishing' to 'guy drawing a picture of Peter Davison and Janet Fielding'. This issue does indeed star Peter Davison's 5th Doctor alongside Tegan, Nyssa and Adric, and puts them in the middle of the Sontaran-Rutan War. I think this is the best issue of Prisoners of Time so far: this issue's storyline is tighter and more effective than previous issues, and the continuing arc actually begins to form up and solidify. Phillip Bond's art fails almost entirely to capture the TV cast's appearances, but he's such an engaging artist I found I didn't mind. (Note: the black and white copy of the Dave Sim cover above is the only one I could find on the Internet. The real one is in colour.) (4/5)

Just when I figured that DC Vertigo was done and dusted, out comes an all-new 10-issue miniseries from superstar creators Scott Snyder and Sean Murphy. In The Wake, a marine biologist is enlisted by the Department of Homeland Security to investigate an unusual sound recorded at an underwater oil rig. This is a wonderfully engaging opening, highly reminiscent of Michael Crichton's Sphere, but with a few flashbacks and flash-forwards that really expand the story and make me wonder exactly what it is this comic is actually going to be about. Sean Murphy's art is, as always, superb, and Scott Snyder is a writer that's really firing on all cylinders at the moment. Science fiction fans should check this one out: it may be a must-read by the time nominations come around for the 2013 Hugo Awards. (5/5)

The latest of the Marvel Now! relaunches is X-Men #1, kicking off the fourth volume of the super-powered mutant saga. A lot has been said about Brian Wood's choice of characters for this new version: Storm, Rogue, Kitty Pryde, Jubilee, Psylocke and Marvel Girl. Most of what's been said has focused on all of them being women. I'd rather focus on the fact that Wood is taking six excellent and often under-utilised characters and finally giving them the spotlight they deserve. They work brilliantly together, their dialogue sparkles and Olivier Coipel's designs make them look fantastic. This is a solid but not spectacular first issue, but it's intriguing enough to stick with - and I'm desperate to see what Wood and Coipel do with this cast. (3/5)

Winner of the Week: The Wake #1. Check it out, sci-fi readers.
Loser of the Week: No loser this week. Even my wallet was a winner.
Posted by Grant at 9:54 AM