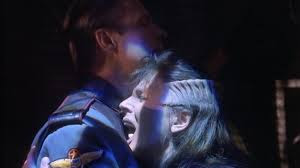 A deadly plague is spreading through Babylon 5, affecting the Markab at first but with the potential to infect everybody onboard. While Captain Sheridan puts the station under quarantine, Dr Franklin races against time with the help of a Markab doctor to find a cure.

Allegories are great in science fiction - at least they are most of the time. They enable a writer to discuss and pull apart social issues or sensitive topics, and do so under a slight abstraction so that the bitter pill of social comment can be swallowed via the sugar coating of laser beams and starships. Of course I noted that allegories are great most of the time. The time when they're not necessarily great is when the writer creates an allegory, and then has his or her characters explain to the audience what it's an allegory of. This is the case with "Confessions and Lamentations", in which characters compare the plague that's killing the Markabs with the AIDS epidemic and the Black Death - and Straczynski even gets his details wrong when it comes to that medieval pandemic. It's rather sad because aside from the obvious and regularly trite dialogue this is one hell of an episode.

Let's jump to the ending, since that's likely what this episode will be remembered for. All of the Markabs die. Not just on the station, either: thanks to the spread of the disease via interstellar travel, every Markab on their home planet dies as well. This is mass carnage: an episode with a body count in the billions.

This isn't a guest bumpy-head-of-the-week alien species, either. The Markab sat on station council meetings. We saw them walking around in the background for two seasons. They're a part of the show, and a notable aspect of the broader Babylon 5 universe. Now they're all dead. No reset buttons, no surprise twists. They all get very sick, and then they die.

It's hard to imagine this episode being done like this in Star Trek: Deep Space Nine. I've avoided directly comparing the two series too often, but here it's a good way of demonstrating just how bold a storytelling choice this episode represents. Imagine an episode of DS9 where a deadly virus threatens to wipe out the Ferengi, and at the end of the hour every Ferengi in the Star Trek universe is dead. It's unimaginable. I may sharply criticise Babylon 5 for its sloppy dialogue, generally weak acting and unfortunate bathos, but when it wants to make an impact it really knows how to make one.

There's some nice character development here: Sheridan and Delenn move a little closer, and onto a first name basis, while Dr Franklin's growing reliance on stimulants to stay awake is once again noted.

This isn't a faultless episode - for one thing there's a tediously overwrought subplot involving a small Markab girl that's positively toe-curling - but it is a bold and memorable one. We're up to 11 good episodes out of 18 this season: four more to go, and the current score is 61%.
Posted by Grant at 7:00 PM