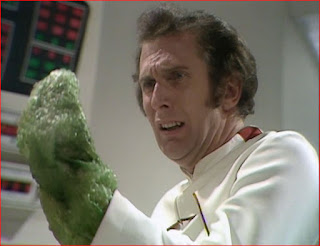 Who50 counts down to the 50th anniversary of Doctor Who by reviewing my favourite episodes and serials over the history of the programme, counting down from #50 to #1. Today, #23: "The Ark in Space", a 1975 four-part serial written by Robert Holmes and directed by Rodney Bennett.

While "Robot" was the first Doctor Who serial to star Tom Baker, it was actually made by the Pertwee era production team: producer Barry Letts and script editor Terrance Dicks. This, then, marks the real beginning of the Tom Baker years, under the guidance of producer Philip Hinchcliffe and script editor Robert Holmes. In the first adventure together, the fourth Doctor, Sarah Jane Smith and Harry Sullivan arrive on Nerva Beacon in the Earth's far future, where the last survivors of the human race lie in suspended animation before they can finally awake and re-populate the planet. The problem is that the Doctor, Sarah and Harry aren't the first visitors to arrive, and an alien menace now threatens the entire human race.

"The Ark in Space" marks the beginning of one of the most popular periods in Doctor Who history - and with good reason. Under Hinchcliffe and Holmes' leadership the series made a three-year transition from being a science fiction series to a fully-fledged horror show for kids, albeit one still dressed very effectively with spaceships, aliens and laser guns. The way in which "The Ark in Space" develops its scares is through one of the perennial horror techniques of Doctor Who: body horror. That is, horror in which the monster does not simply stalk you - it turns you into a monster yourself.
It's one thing to be attacked by a bug-eyed green monster, but to be turned into the same monster? To lose your humanity? To transform into some inhuman thing hunting down and killing your friends and family? As a small child I was never really scared of Daleks. I was terrified of body horror. The one Doctor Who story to give me nightmares was "The Seeds of Doom", in which an alien pod infected human beings and transformed them into horrifying and homicidal plant monsters. "The Ark in Space" was not the first Doctor Who serial to feature humans being transformed into monsters - it's pre-dated by both "The Tomb of the Cybermen" and "Inferno", for example - but it is the first one in which that transformation is treated as a biological infection. It presents the Doctor Who monster as a disease that you catch, and which changes you into something terrible.

From here we see similar body horror tropes used in "The Planet of Evil", "The Seeds of Doom", "Full Circle", "Kinda" and "Snakedance", "The Curse of Fenric", "Survival" and "The Empty Child", to name a few. It's a trope that the series constantly returns to, because it's constantly effective.

So here we have the Wirrn, essentially a species of space-faring locust, who can sting and infect human beings, causing them to pupate into yet more space-faring locusts. The make-up effects are legendarily dire, with actors wrapping their arms up in spray-painted bubble wrap, but conceptually it remains highly effective.

Truth be told, there's nothing significantly original about "The Ark in Space". The ultimate reason why it's ranked so highly for me is that it simply doesn't put a foot wrong. The Doctor, Sarah and Harry are a fantastic team, and immediately gel as one of my favourite Doctor/companion combinations ever. The guest cast are fantastic. The plot is tight and rivetting. Despite being almost 40 years old it really hasn't aged too badly at all. In many ways this is the archetypal Who adventure: the Doctor and his companions arrive somewhere, and protect a group of humans from a siege of alien monsters. If there's one classic Who adventure to show to someone who's never seen the television series before, "The Ark in Space" is very possibly the best choice. I don't believe I shall ever tire of watching it.

To see more of my Who50 posts, click here to access the Who50 page with links to the previous 27 entries.
Posted by Grant at 11:29 AM