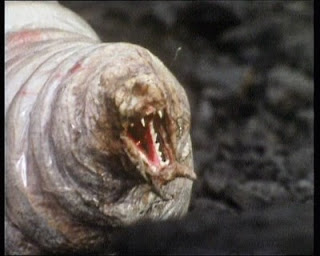 Who50 counts down to the 50th anniversary of Doctor Who by reviewing my favourite episodes and serials over the history of the programme, counting down from #50 to #1. Today, #24: "The Green Death", a 1973 six-part serial written by Robert Sloman and Barry Letts (uncredited) and directed by Michael E. Briant.

The giant maggots. They're possibly one of the grossest monsters Doctor Who ever had; after all, who on Earth actually likes maggots? They're disgusting. They sort of pulsate. They squirm over rotting things. Just the thought of them make most people involuntarily shudder. I suppose it's no surprise that they, and "The Green Death", are among the most fondly and distinctively remembered elements of the original series.

"The Green Death" sees UNIT head off to investigate deaths in a Welsh coal mine. The Doctor and the Brigadier find a new chemical plant open close to the mine, conspiracies to commit murder, deadly pollution, shocking mutations and a sentient computer planning to take over the world. Jo Grant, meanwhile, finds love in the shape of a passionate young ecologist. Everybody finds deadly giant maggots swarming at the bottom of the mine shafts.

It is true that "The Green Death" is, at six episodes, a little over-long. It is also true that it's fairly offensive in its depiction of the Welsh (don't feel too sorry for the Welsh though - they make the programme now). Thirdly, it is true that the Doctor sneaks into Global Chemicals disguised as a comedy cleaning lady. Once those three elements are put aside, this is one of the best Doctor Who serials of all time.

This is a story about something. It's not just a pleasant romp through the countryside: it's a warning to the audience about the dangers of pollution. It's arguably more prescient today than it was 40 years ago when it first aired. In fact, by a stunning coincidence (and it is really a coincidence) I'm writing this exactly 40 years to the day since the first episode of "The Green Death" was broadcast on BBC1. It's arguably Doctor Who at its best: there is danger and evil afoot, and the danger is averted and the evil defeated by science. Television back in the 1970s didn't work along concepts like "season finales", but if they did, "The Green Death" is a wonderful, climactic one.

At the end of this serial, and utterly in love with Professor Clifford Jones, Jo Grant resigns from UNIT and leaves the Doctor's side. The Doctor leaves her a wedding present - a blue crystal from Metebelis III - but does not say goodbye. His silent drive into the night, the engagement party going on without him, is one of the most touching endings any Doctor Who serial has ever had. It's been four decades and the series is still mining that moment for inspiration.

This is, sadly, Jon Pertwee's final appearance in my top 50. I'm not a particularly keen fan of his era of the series. I find the idea of an anarchic character like the Doctor working a day job for the military something of an anathema in relation to the rest of the series. I generally find the chummy, cosy "UNIT family" to be vaguely tiresome, and - I am very sad to say this - Jo Grant to be a fairly unappealing companion. Give me one of the Romanas or Barbara Wright any day.

Despite this, when working out which Doctor Who serials and episodes were my 50 favourites, I wound up with six Jon Pertwee adventures on my list: "Terror of the Autons" at #50, the trifecta of "Doctor Who and the Silurians", "The Curse of Peladon" and "The Sea Devils" at #37 through #35, and "Day of the Daleks" at #30. What does this mean? For me, it means that when the Pertwee era is average, it really is very average. When it's good, however, it is - to quote another Doctor - fantastic.
Posted by Grant at 5:59 PM