One thing that's become pretty clear about DC's publishing strategy in recent years is their criteria for cancelling a monthly book. Generally speaking, if a book drop below 20,000 copies a month it's in danger. If sales drop below 15,000 copies it's pretty much toast. This means we can get an easy idea of which books are likely to be in danger, which are circling the drain, and which ones might be getting a temporary reprieve. 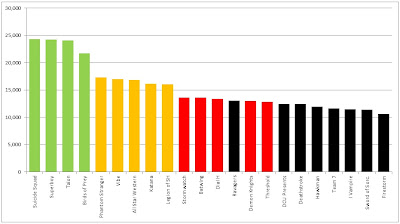 Here's the titles most at risk for the month of March 2013. Titles in black have already been cancelled, and are simply running out their final issues. Titles in red are on deathwatch: they're selling less than 15,000 copies and are mostly relying on new creative teams to turn them around with fresh directions or characters. Titles in orange are selling less than 20,000 copies but more than 15,000, so they're in danger of cancellation over the next year but are probably safe for now. Titles in green are selling less than 25,000 copies but more than 20,000: they're definitely safe, but if I was DC I'd be keeping a very close eye on how their sales progress in the coming months. The graph is a little small: if you click on it you should get a larger version to look at.

Let's ignore the books that are already cancelled, and first check out the five that, by all rights, should be cancelled. They are (in alphabetical order): Batwing, Demon Knights, Dial H, Stormwatch and Threshold. Three of these (Batwing, Demon Knights and Stormwatch) are New 52 launch titles. As of April 2013 each has published 21 issues. The other two, Dial H and Threshold, are more recent. What should DC do with each of them?
Next up are the five series that, while not absolutely guaranteed to fail within the next few months, are visibly on the way out. They are (again, in alphabetical order): All-Star Western, Katana, Legion of Super-Heroes, Phantom Stranger and Vibe.
That's potentially 10 books cancelled at once. If DC was ballsy enough to do that, I think launching 10 all-new monthlies the following month would give them a real chance at creating another New 52-style boost in sales. Launch two books, and readers will often umm and ahh about whether to try one of them out. Launch ten books, and readers will potentially get caught up in the excitement and try all ten.
Posted by Grant at 10:23 PM