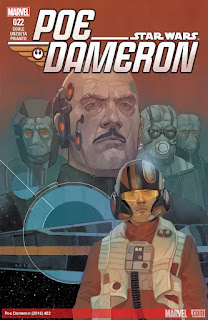 It's my experience that Marvel's Star Wars comic books work best when they blend elements from multiple films, and add fresh material of their own. It's the approach that made Kieron Gillen's Darth Vader run sing - and which led to an excellent spin-off book Doctor Aphra - and it's the approach that makes Charles Soule's latest issue of Poe Dameron feel so entertaining as well.

Lor San Tekka (played in The Force Awakens by Max Von Sydow) has been captured by a Trade Federation baron, and to rescue him General Leia and Captain Dameron must work together on a calculated heist to get inside the baron's facilities and steal him out from under the baron's nose. It throws in back story from the Star Wars prequels, foreshadows the relationship between Leia and Poe in The Force Awakens and The Last Jedi, and chucks in a couple of well-devised original characters.

It's a great issue, with strong art by Angel Unzueta and colours by Arif Prianto. I've gone up and down on Poe Dameron; with this issue I am way, way up. (4/5)

Under the cut: reviews of Doctor Strange, Invader Zim, and Ms Marvel.

Finally some back story and context, as readers discover precisely why Stephen Strange is moonlighting as a veterinarian while Loki acts as Earth's Sorcerer Supreme. It is a weird set-up for a storyline, but one that writer Donny Cates is exploiting incredibly well for both humour and drama. The return of Marvel's Superman analogue Sentry adds a certain level of portent to the book - particularly his return to Asgard during this issue's climax. Gabriel Hernandez Walta's sketchy art style is great, although it's slightly loose style appears to challenge colourist Jordie Bellaire a little - there's something very slightly off about how the art and colours interact. (4/5)

Gir dresses up as a human and joins Zim at school. This is a weirdly difficult issue of Invader Zim, because there is an overwhelming gulf between Sarah Graley script and her artwork. The script is beautifully on-point, with plenty of comedy and an immediate understanding of how the characters work and interact. The art, sadly, is damn-near unreadable: unprofessional, weak and horribly proportioned, it looks like something an eight year-old child would draw. Hand on heart I have not read a worse-looking comic book this year, and that pretty much deflates the entertainment value of Graley's writing. (2/5)

With Kamala Khan removing herself from New Jersey, her friends band together in an effort to not only find out where she has gone but to fill in as Ms Marvel in her absence. It's a nice chance to shift the spotlight onto Ms Marvel's supporting cast, with G. Willow Wilson finding enormous scope for character insight and well placed humour. Leon and Herring's artwork continues to be pitch-perfect for the book. This book remains pitch-perfect for the sort of material Marvel should be publishing more often. (4/5)
Posted by Grant at 3:43 PM