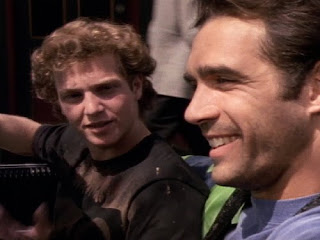 It is 19 December 1992, and time for another episode of Highlander: The Series.

Richie (Stan Kirsch) is trying to find out who his birth parents were, which leads the desperate con artist Joe Scanlon (J.E. Freeman) - who is in for $50,000 with the local mob - to masquerade as his father to get the money from him. Macleod (Adrian Paul) is suspicious, which puts him up against Joe's crime boss (Tamsin Kelsey) and violent henchman (Peter DeLuise).

Highlander's second episode is much better than the first: it's cleanly plotted and shot, the acting is better, and the production values seem a great deal stronger now that the majority of the budget isn't being spent on Christopher Lambert. You shouldn't get the wrong idea, however; "Family Tree" is still awful. It is derivative, creatively lazy and has almost nothing whatsoever to do with immortals fighting each other to the death. Some decent flashbacks to 16th century Scotland do lift it up a little, but certainly not by enough.

There is nothing in the episode's present-day storyline that feels original or interesting. Not only is it a bundle of cliches, the complete lack of fantasy content makes one wonder why the episode was produced at all. It is a bit like making an episode of Grey's Anatomy entirely dedicated to characters playing golf; it might be a vaguely interesting game, but it's not what the audience came for. This is particularly true given we're at the second episode. Thankfully it's clear someone along the production train recognised this, because on broadcast "Family Tree" was moved from 2nd in line to 11th. At least by then the series might have settled down a little.

Even punted down to the middle of the season, this is not by any decent definition good television. All of the characters play stereotypes - often painfully so. Peter DeLuise (of 21 Jump Street fame) plays the most obvious of mob heavies, and while he's clearly having a ball doing it I'm not sure that enjoyment extends to the audience. Likewise J.E. Freeman is saddled with a terribly unconvincing role - the con man in debt trying to scam Richie of money.

The episode's one saving grace is its flashbacks, revealing Duncan's own shift from near-death to immortality and his abandonment by his father. It's a well developed and engaging series of scenes, and actually makes sense to come second. Sadly there's not enough of it to overcome the tedium of the main plot. It may be better than the pilot, but "Family Tree" is still bad television. Two episodes in, and Highlander Season 1's quality ratio is flatlining at zero per cent.
Posted by Grant at 4:05 PM