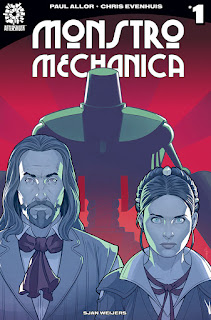 In 15th century Florence, Leonardo da Vinci works building war machines for the Medici while secretly building his own wooden automaton. I love period settings in comic books, and with this combination of history and science fiction the new comic series Monstro Mechanica is well set to be exactly the sort of book that I like.

What makes this book work isn't just the genre blend. It is also the characters, with Da Vinci sharing the limelight with his young female apprentice Isobel - a rebellious woman who turns head by her insistence on wearing men's clothing. On top of that it is the beautiful clean artwork by Chris Evenhuis, which feels quite reminiscent of the work undertaken by Mike Norton in Image's Revival. Sjan Weijers adds some outstanding colours too, with each page using a limited but rich palette. Altogether it's a highly promising package.

Of course it's hard to judge a whole story via its first issue, but as an opening chapter Monstro Mechanica seems very promising indeed. (4/5)

Under the cut: reviews of Invader Zim, Mister Miracle, and The Wicked + the Divine.

Zim remains the prisoner of the mysterious Virooz, whose plans for Zim are finally revealed. It's been fun reading a slightly longer-than-average storyline in the past few issues. It has given the opportunity for a little more complexity than the fairly confined gags of most other issues, and that in turn provides room for more and slightly better jokes. At the end of the day this book is what it is: an adaptation of a popular cartoon that's never quite as effective as that cartoon. Within those parameters, however, this was a pretty good issue. (3/5)

With his execution fast approaching, Scott spends his last day with Barda. It's a heartfelt issue packed with small moments. Some of them are funny, some sad, some are even surprisingly sexual for a DC Universe book; all of them feel remarkably well observed. Exactly what is going on in terms of the overall arc still seems a mystery; the weird "glitch" panels peppered throughout the book feel like a puzzle I am not quite smart enough to solve. While somewhat incomprehensible, it's emotionally a hugely effective read. (4/5)

The Wicked + the Divine Christmas Annual #1

This is not the first comic book to come to mind when considering those that would benefit from a Christmas special. Of course, once read it was clear this wasn't a typical kind of Christmas special anyway. A large team of artists jam together to present a string of vignettes, each showing the members of the Pantheon in earlier and often happier times, all prior to the events of the very first issue. It's not a must-buy by any means, and certainly for the casual reader it's entirely impenetrable, but for the fans this is a wonderful Christmas present. (4/5)
Posted by Grant at 5:18 PM