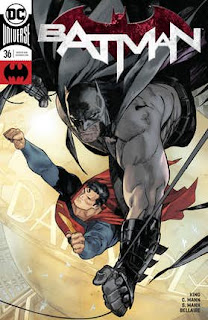 Tom King is regularly and effectively perfect as the writer of Batman. Take "Superfriends", the new storyline beginning in issue #36. Bruce Wayne and Selina Kyle are engaged. Bruce has told his sons, both biological and adopted. Now, surely, it is time to tell his best friend Clark - but is Clark his friend? Do Batman and Superman have anything in common?

Over the course of one issue Tom King drives right to the heart of Bruce and Clark's relationship: how they relate to one another, how they perceive one another, and just why a friendship between the two seems so odd and difficult. The characterisation is pitch-perfect; not just the two superheroes but also their respective partners Lois and Selina. It is regularly and hugely funny, but then that humour leads to genuine insight.

It's a structural marvel too, with a clever layout and story structure that impresses enormously once it becomes apparent. Clay and Seth Mann's artwork is simply stunning, and excellently coloured by Jordie Bellaire - currently the best in the business, as far as I'm concerned.

I really think this might be my favourite King issue of Batman so far. It's quite simply and effectively perfect. (5/5)

Under the cut: reviews of Darth Vader, Rocko's Modern Life, and Superman.

Jedi Master Jocasta Nu has infiltrated the Jedi Temple on Coruscant, but now she must face Darth Vader. There's nothing in this issue that is bad in any respect: the story is clear, the dialogue appropriate, and the artwork very attractive. At the same time, it just feels dreadfully pedestrian. Things happen, but there doesn't seem to be very much at stake. Characters go through the motions. There's precious little emotional involvement. Kieron Gillen's initial Darth Vader run worked brilliantly because it dug into the mind of its protagonist. Charles Soule's run simply seems to exist because Gillen's volume sold so well. (3/5)

In 2017, everything gets to become a comic book. Following the successful launch of a monthly Rugrats comic, Boom Studios now progress to reviving 1990s fan favourite cartoon Rocko's Modern Life. For anybody who remembers the original show, this is a pitch-perfect follow-up featuring the same tone of humour and the same cast of characters. If you loved Rocko back in the day - and I certainly did - this is a wonderful slice of nostalgia. If you have never seen it before, this might all be a bit weird and difficult to engage with: this issue makes few concessions for new readers. (3/5)

The battle for Darkseid's throne reaches at least a temporary climax in Superman #36. The results seem less of a conclusion in themselves and more an ominous arrow pointing to a much larger crisis in the future. In terms of writing and artwork, this is a satisfying climax and a very enjoyable read. Most importantly it's an issue with repercussions and a shift in character relationships: Lex Luthor will be well worth keeping an eye out for in the mid-term future. (4/5)
Posted by Grant at 5:05 PM