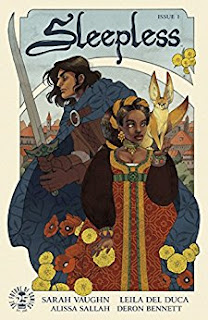 Pyppenia - known familiarly as Poppy - is a princess; the illegitimate daughter of a recently deceased king. On the day of her uncle's coronation, Poppy falls under attack - and her 'Sleepless' bodyguard is the only man standing between her and death.

Sleepless is a new fantasy series from Image: written by Sarah Vaughn and illustrated by Leila del Duca, it introduces a medieval kingdom, courtly intrigue, an appealing and upbeat protagonist, and a strange magical sort of guardian. There is not a lot of detail here; in fact, this first issue feels more like a prologue than a genuine first chapter. Despite this, its evocative setting, beautiful artwork and clever world-building make it immediately addictive. It promises an excellent series to come.

Del Duca's artwork is beautiful. It isn't simply the art style, it's the production design: the costuming of this series is eye-catching and richly detailed. It all feels like a proper place, with a consistent and believable aesthetic. Sarah Vaughn's script teases a world without really opening it. It makes issue #2 a tantalising proposition, since what has been revealed so far is so evocative and entertaining. This seems all set to be a marvellous new comic book. (5/5)

Under the cut: reviews of Deadman, Green Arrow, The Power of the Dark Crystal, and Usagi Yojimbo.

Neal Adams is a legendary comic book artist; it was Adams' art on Batman that first made me a DC Comics fan as a child. His current artwork has shifted from his heyday; it's a lot looser now, and a bit too densely composed, but it's still among the best in the business. His writing through - that's another matter. Deadman is like being told a story by an over-caffeinated eight year-old: it is all breathless exposition, sudden flicks and turns in story direction, and almost random cameos and guest appearances by what essentially feels like Adams' action figure collection: Batman, the Phantom Stranger, the Demon, and so on. It can be great fun, but I think you really need to let go of any expectation of a sensible narrative as you go. (3/5)

Oliver Queen teams up with his presumed-dead mother to rob the ruins of the Ninth Circle's key vault, lost somewhere deep on the ocean floor. Back in Seattle, Oliver's fast-approaching murder trail hits a few fresh problems. Juan Ferreyra's artwork remains vivid and rich as always, and the book's measured pace helps balance plot with character and tone. All of the world and character building that Benjamin Percy has done with this book over the past 18 months is really paying off: this is a rich, complex story he is telling, and each issue it develops in entertaining and dramatic ways. I am interested to see how the book's shift to a monthly schedule will affect all of that, since there's a chance the book may start to drag. (4.5)

The Power of the Dark Crystal #9

One of the things that Archaia's sequel comic series has absolutely nailed is The Dark Crystal's particular blend of wonder, hope and darkness. Wonder because of the hugely imaginative settings and characters - a set of boiling-hot fire caves make a big impression this issue, hope because it is at its heart an uplifting quest narrative, and darkness because it really is not afraid to put its characters in peril. People are injured. People may die. The only real disappointment I have with The Power of the Dark Crystal is that Jim Henson Productions never managed to produce it as a film; it's a respectful and effective follow-up to a legendary film. (4/5)

While investigating corruption at the silver mint, Usagi has found himself captured by the Black Goblin Gang - whose mysterious leader has a lot more to do with Usagi's recent adventures that the rabbit ronin realises. I have always felt that Usagi Yojimbo gains an extra level of depth with its longer storylines, and this one has cleverly tied in about a year's worth of adventures in one well-placed scene. Sakai's striking black and white artwork continues to impress me: so much emotion and energy in such simple brushstrokes. The ongoing one-page "Chibi-Usagi" serial on the back page is also a continuing small delight. (5/5)
Posted by Grant at 8:56 AM