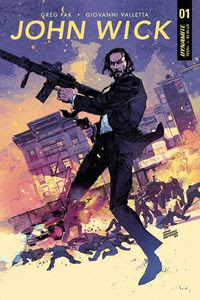 The latest movie property to be adapted into a comic book is John Wick, the 2014 action film directed by Chad Stahelski and David Leitch. Thanks to Dynamite Entertainment and writer Greg Pak, John Wick's ultra-violent gun-shooting adventures come to comic books on a monthly basis.

It's a wonderful concept to adapt, given Wick's stripped-back nature and reliance on near-endless, brutal gunfights. It is also heartening to see a talented writer like Greg Pak taking the reins. This first issue kicks off with Wick revisiting his childhood with lethal intent, and fills in some back story in the process.

Telling an origin story feels in some small part a betrayal of the films, since Wick's pre-existing reputation and anonymous history forms a fairly key part of his appeal. At the same time Giovanni Valletta's artwork does not seem dynamic and energised enough to capture the tone of the two John Wick films. There's promise in a John Wick comic book, but based on this first issue Dynamite is struggling to find it. (2/5)

A five-week month usually means a couple of annuals from DC Comics, and November was no exception. This one-shot from guest writer Phillip Kennedy Johnson sees a jump into the future for Aquaman and Mera, where Atlantis is at peace and their young son is their most important consideration. It's very nicely and strikingly illustrated by Max Umara, but the storyline feels unsatisfactory. It is - hopefully this isn't too great a spoiler - all an illusion, and these kinds of 'it was all a dream' stories kind of grate on the nerves. It's well executed, but it executes something that isn't very interesting. (3/5)

Atomic Robo: The Spectre of Tomorrow #2

The new Tesladyne laboratory cannot be build because Sir Richard Branson is blocking construction work. Robo should be helping, but instead he's spending most of his time building a new kind of networked robot. At CERN in Switzerland, an advanced android has been uncovered and deactivated - only it is so advanced it may not even have been aware it was an android at all. This is a smart, science fiction comedy with a fast pace, rapid-fire dialogue, and bright, cartoon-like artwork. Quite why it isn't a weekly television cartoon already is beyond me. (4/5)

With the monthly Batman issues focused on Bruce and Selina's engagement, this extra-length issue jumps back and shows off their growing relationship from the beginning. It is a beautifully formed series of vignettes, which bring a huge amount of warmth and wit, as well as insightful moments of character. Just when you think the story is reaching its end, it keeps going - turning this one-shot into something truly remarkable. If it were just the 30-page story illustrated by Lee Weeks, this would be a wonderful issue. The eight-page epilogue illustrated by Michael Lark ensures that Batman Annual #2 will be one of 2017's most popular single issues. (5/5)

Kronos finds himself surrounded by vampires impervious to usual forms of attack, with no apparent hope of escape. This pulpy, violent adventure is exactly what an adaptation of Brian Clemens' film deserves. Dan Abnett has written a story that's simple, action-packed and rich in melodramatic characters. Hiring Tom Mandrake as the artist was a master stroke: his artwork gives everything an old-fashioned feel that ups the sense of nostalgia and makes this book an absolute pleasure to read. (4/5)

While there have been quite a few storylines I've enjoyed in this third year of The 11th Doctor, the overall story arc involving the Sapling and a rogue Silent has left me utterly cold. Now that we're hitting the end of the volume, that means tying those two characters' storylines up. It also means, correspondingly, that my interest has dropped through the floor. The artwork in this issue is strong and appealing, but the story simply lets everything down. (2/5)

This is the third of the DC annuals this week, and weirdly it also involves mind-controlled illusory worlds just like Aquaman did. It's obviously a weird them - either that or an editorial cock-up. It has the same drawbacks as Aquaman too: with everything being an illusion, what is there for the reader to actually care about? Eleonora Carlini's artwork is appealing, and on a moment-to-moment basis Benjamin Percy provides entertaining enough action and dialogue, but that underlying sense of pointlessness is difficult to escape. (3/5)

It's an unexpected thrill to see Poe Dameron's mission to rescue the mysterious Lor San Tekka (the man played by Max Von Sydow in The Force Awakens) incorporate Princess Leia in the field. Carrie Fisher's death a year ago affected pretty much all Star Wars fans, so every time we see her character now feels like a bittersweet gift. It's also nice to see this issue tie into elements from the prequel trilogy in a manner that enriches the overall story. (4/5)

So far Sacred Creatures has offered a fascinating blend of contemporary urban fantasy and Biblical mythology, benefiting from strong artwork and longer-than-standard issues. This issue, however, oversteps the mark in a slightly unpleasant way. There has been confronting violence before - that's part-and-parcel of Janson and Raimondi's premise - but in this case a character death comes straight out of the "women in refrigerators" handbook, and that's deeply disappointing to me. It's taken the shine off a good book - at least temporarily - and made it a bit difficult to enjoy. (2/5)

Spy Seal reaches its climax as MI:6 storms an enemy base inside a Scottish castle. This has all been breezy fun, but my niggling doubt is that it all feels like it should have been more fun that it was: European styled light-hearted spy adventure featuring anthropomorphised animals should be a wonderfully silly thing to read, but yet it never felt quite funny enough or quite enough of an adventure. It ends up merely feeling 'good' when it should have felt 'brilliant'. Still, the ingredients are all there; I'd be very happy to see Tommaso give it all a second try in a few months' time. (3/5)

I have to admit I'm not a huge fan of parallel universe stories, where character meets alternative versions of themselves. That's occasionally a mild inconvenience as a Star Trek fan, since the franchise seems mildly obsessed as times with its Mirror universe and other alternate takes. That's all this issue is, really: different version of the Trek gang interacting with one another, followed up by a really annoying-looking cliffhanger. Some readers might get a kick out of it all, but for me it feels strained, stupid and a chore to read. The artwork is solid, but it serves a bad story. (2/5)

All of the other iterations of Star Trek have received at least a cursory amount of love from IDW, so why not Discovery too? I was intrigued to know how they were going to shoe-horn this series into continuity, given the fairly tight run of storylines so far in the TV version. It turns out we get back-story: in this case, the life story of T'Kumva, the Klingon agitator who helped the spark the Federation-Klingon war in Discovery's two-part premiere. The Klingons are the least interesting aspect of Discovery on television, so this new miniseries strikes me as an almost dictionary-level definition of "unnecessary". It's well illustrated, and actually manages to draw in a bit of broader Star Trek continuity in a manner seemingly beyond the TV series, but anyone but the hardcore can probably leave it be. Anybody hoping for a USS Shenzhou series will be rightfully furious. (2/5)
Posted by Grant at 12:44 PM