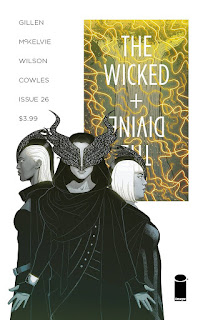 The world may be ending, and the gods need to discuss what - if anything - they are going to do about it. Kieron Gillen and Jamie McKelvie's The Wicked + the Divine has been an astonishingly good series. Sure there have been a few wavering periods, but it has always pulled itself back to feel challenging, hugely entertaining and very contemporary. It is a book for now.

We knew, as readers, that Ananke was murdering the pantheon of gods to prevent the coming of a great darkness, but then the pantheon killed Ananke. Without the required sacrifices being made, that darkness now appears to be both real and present. The beauty of this series - and this current story arc in particular - is that I have no idea where this is all going. Maybe the gods will all die. Maybe the world will simply end. Maybe they will somehow emerge victorious. I could honestly believe any of these things might happen - that's what makes WicDiv (as the fans call it) so addictive.

Jamie McKelvie's art remains sensational, with a perfect handle of character expressions and emotions. He really is one of the best in the business. (4/5)

Under the cut: reviews of All-Star Batman, Doctor Who: The 11th Doctor and Ms Marvel.

After defeating Mr Freeze's attempt to unleash a prehistoric spore into the atmosphere last issue, Batman now journeys out into the desert to meet with Poison Ivy: the spore escaped after all, and her botanic skills might be the key to saving thousands of lives. Tonally it's a very similar issue to the last, but structurally and aesthetically it feels very different. There is a nice narrative jump at the beginning: we're seeing Batman's encounters with the villains, but not the legwork in between. It's giving the storyline a very distinctive vibe. The art by Tula Lotay is a little off unfortunately, with deliberately scratchy inks and colours and a very static, stiff pencilling style. It lets the issue down a tad. A backup strip illustrated by Francesco Francavilla looks much stronger, even though the storyline remains relatively slight. (3/5)

A bit of a misfire for all concerned. Not only does the central storyline about a member of the Silence wanting to steal the Doctor's memories feel poorly thought-out and confused, but it also features a brief return for Jones, the time-travelling pop star based so crudely on David Bowie that it's painful to read. Casco and Diaz's art is also relatively weak, leaving this issue without very much to recommend at all. After the great work done in the second volume of this series, the drop in quality for the third volume kind of hurts. (1/5)

There is a nice side story to this issue, where in parallel to Kamala discovering an anonymous computer hacker has discovered her identity, a teenage classmate has had her private and unpleasant text messages outed to the entire school. It's this kind of superhero-high school parallels that make Ms Marvel work so well. By the issue's end the threat from the hacker takes on a whole new dimension, which seems rather clever and exciting. (4/5)
Posted by Grant at 5:28 PM