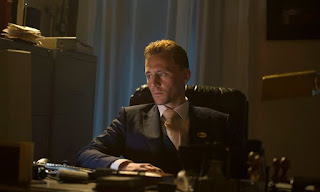 It is 21 February 2016, and time for the first episode of The Night Manager.

Jonathan Pine (Tom Hiddleston) is the night manager at Cairo's prestigious Nefertiti Hotel. During the chaos of the Egyptian Revolution of 2011 he becomes involved with Sophie Alekan (Aure Atika), mistress to wealthy and influential playboy Freddie Hamid. When Sophie hands him documents to be copied and placed in the hotel's safe - documents that report on a massive illegal arms sale - Jonathan finds himself drawn into the world of international espionage.

The Night Manager is a glossy, lavishly produced TV adaptation of the John Le Carre novel of the same name, co-produced by the BBC and AMC and released to much acclaim last year. That acclaim is well deserved. This is, based on its first episode at least, a brilliantly directed low-key thriller with an excellent cast and a gripping narrative.

Le Carre is particularly suited to television, much more than cinema. His narratives require a slow burn: time to get to know the characters and their predicaments, and to slowly tease out quite complicated set-ups of relationships and agendas. His popular novel Tinker Tailor Soldier Spy is a perfect example: a near-flawless masterpiece when adapted as a six-episode miniseries, but infuriatingly compressed and complicated as a two-hour feature film. I suspect the same would be true of The Night Manager: as a film it would need to be compressed and rushed. As a television series it stretches out and provides all manner of additional depth and nuance.

That nuance begins with a wonderfully ambivalent performance by Tom Hiddleston as Jonathan Pine. He begins the episode as a consummate professional: impeccably tailored and flawlessly calm, he shows himself to be unflappable as Cairo erupts into disarray around him. It is only through his encounter with Sophie Alekan and her dangerous arms-dealing lover that the cracks begin to show. We can catch glimpses of a more haunted and troubled man underneath. In the episode's second half, in which the story jumps not only to another country but also several years forward, that veneer of cool professionalism seems a little worn and fragile. It's a wonderful multi-layered performance.

The series' villain, billionaire philanthropist and secret arms dealer Richard Roper, is played with a wonderfully arrogant charm by Hugh Laurie. In many ways it is a perfect role for Laurie, trading on his long comedic past playing a variety of upper-class twits. Here he gets to turn that persona on its head. Roper might be a superficially archetypal rich Englishman - he calls his right-hand man Corky and his chief bodyguard Frisky, for example - but there's a wonderful underlying menace in his eyes while he potters around. The episode deliberately withholds his arrival: he's seen briefly in a Youtube video at the episode's beginning, but it is quite late in the day when he finally makes his proper debut in Switzerland.

The episode is not flawless: it effectively uses Sophie as a prop, designed from the outset to be brutally murdered halfway through the episode to provoke Pine into action. That is a tired cliche, even when the novel was published more than 20 years ago. To an extent the loss of Sophie is off-set by the arrival of the shambolic and perpetually exhausted British intelligence agent Angela Burr (a masterful Olivia Colman), but does still feel a little stereotypical in an old-fashioned sexist kind of a way.

As a stunning opening chapter, the first episode of The Night Manager is hard to beat. It's smart, stylish, well-measured and highly addictive stuff.
Posted by Grant at 5:11 PM