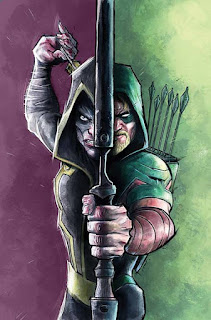 DC Comics have really improved the quality of their books following DC Rebirth, pretty much by listening to their fanbase and delivering the sort of superhero books that the fans actually want to read. Popular versions of characters have returned, the style of storytelling has become much more gripping and addictive, and there's a really unified sense of style and purpose to the entire DC Universe line.

A fantastic example of that is Green Arrow. There was an attempt with the New 52 to re-imagine the character a little, and to make him a little younger and less experienced. It never really took, with a couple of different creative teams taking a shot at making changes and adjustments but never really finding a format that actually worked for the character. By contrast Benjamin Percy has stuck to the basics and delivered what feels like classic Green Arrow. He's still a rich masked vigilante like Batman, but he's a passionate social crusader with a green hood an blonde goatee. He's in a relationship with Dinah Lance, aka Black Canary. He's a more street level vigilante than a lot of his companions: less gadgets, and less outlandish stories. This current arc has dealt with corrupt politicians, a capricious media, and a rogue police unit murdering homeless and vulnerable people to 'clean up the streets'. It is exactly the kind of storytelling that made the character work so well in the 1980s and 1990s.

Otto Schmidt's artwork emphasises moments of action and movement beautifully, which accentuates the regular chases and fights that Percy peppers throughout each issue. This issue has a bunch, and just when it seems all settled a great surprise throws everything back into the air again. This is one of my favourite DC comics at the moment. I did not expect it to be when DC Rebirth was announced, but here we are. Check it out. (4/5)

Under the cut: reviews of Faith, Giant Days, and Superman.

Faith is stuck seeing recriminating ghosts from her past, causing a crisis of confidence and lot of personal guilt until she clues into what's really going on and sets out to stop it. This issue's got the return of an old villain, but a really low panel count that makes it feels ridiculously slight and brief. It also still features Joe Eisma's fairly weak, listless artwork. I really liked Faith when it launched, but of late the book's been sliding badly. She's a great character and deserves a great book. Right now she isn't getting one. (2/5)

Giant Days was only initially envisaged as a miniseries, and it was after strong sales and popular fan response that Boom Studios expanded it first into a longer miniseries, and then ultimately into its current ongoing format. Now that we're about two years in it is interesting to see the change that such an extension has made to the book. It was originally an out-and-out comedy, but now with a continuing narrative and a regular set of characters it has gradually slid into something more like a light-hearted soap opera. This issue sees co-protagonist Susan finally have to deal with her ex-boyfriend's new girlfriend. It's familiar, heartfelt, and still very funny. I really love this book, soap opera antics and all. (4/5)

To a large degree this "Multiplicity" arc has felt like a missed opportunity, with an inter-dimensional giant named Prophecy kidnapping and absorbing the powers of the Superman from each parallel Earth in the multiverse. There's so much scope for a massive, expansive epic storyline here that in the end it feels a little too small and rushed. There are highlights, though, including a very Crisis-like personal sacrifice and an ending that once again pushes along the lurking threat to the DC Universe that has been hovering beyond the horizon since Rebirth started. This is the best issue of the story arc by far, and makes up for a lot of the shortcomings of the previous issues. (4/5)
Posted by Grant at 7:22 AM