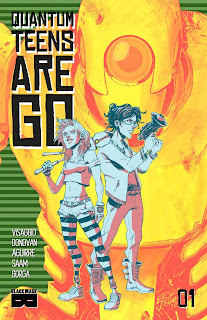 Sumesh and Nat are two hugh schoolers raiding abandoned technology parks for parts, in order to build a time machine. That seems to be basic premise of Quantum Teens Are Go, a marvellously energetic new comic book from Magdalene Visaggio and Eryk Donovan. There is plenty to recommend here, including the loose, agile art style and warm colours, the swiftly moving storyline, and perhaps most intriguingly of all its two distinctive protagonists.

Representation matters, and so I'm really happy to see this book not only focus on a transgendered teenage girl and her Indian boyfriend but treat it as something relatively commonplace. There's a short dialogue exchange between Nat and her mother about her transition, but that's about it. Beyond that the characters are what they, and no one seems that concerned. I like that.

Black Mask Studios are setting up quite a run of enthusiastic, original comic books. Some of them feel a little inexperienced, but I suspect that is because in many cases they are. This publisher seems to be rapidly turning into a showcase for promising early career writers and artists. This title in particular is off to an entertaining start.

Under the cut: reviews of Detective Comics, Hulk and Justice League of America.

The long-foreshadowed story arc "The League of Shadows" kicks off here, as Lady Shiva makes her much-awaited return to the DC Universe. I am straining to recall if this is her first post-New 52 appearance. I think it is, but am willing to be corrected. She comes to Gotham with a plan to create chaos, beginning with framing Batman for murder. It is a solid opening act, but doesn't quite manage to create that all-important hook to keep readers desperate to discover what happens next. That said, the focus on Orphan, aka Cassandra Cain, is a nice development. (3/5)

This new She-Hulk series is great. It focuses on a depowered Jennifer Walters, struck by post-traumatic stress and doing everything she can to stop herself from transforming back into a rage-filled green monster. Her current legal client is Maise Brewn, a mutant shut-in who appears to have a homicidal imaginary friend. It is well written, and Nico Leon is doing tremendous artwork here, but there really is not a lot that happens in issue #3 that we didn't already see in issue #2. The story needs to move forward better in issue #4 if it wants to continue being one of Marvel's best new titles. (3/5)

Batman's newly formed Justice League of America is weird. He claims it is all about putting trustworthy humans front-and-centre for the public to trust, but adds the alien psychopath Lobo to the line-up. It has been intimated that he is setting up a team to help defend Earth from an incoming catastrophe, yet loads his team with comparative newbie heroes like the Atom, the Ray and Killer Frost. This issue sees the new team's first major challenge arrive: Lord Havok and the Extremists. It's a solid superhero fight, but so far there's nothing here to grab anyone's attention. (3/5)
Posted by Grant at 9:06 AM