Doctor Who: "Day of Reckoning" 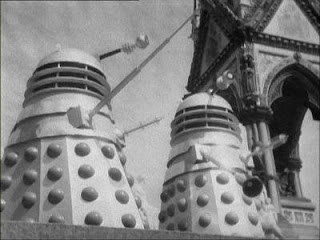 While the Doctor (William Hartnell) is rescued from the Dalek saucer, Ian (William Russell) remains trapped onboard as it travels to the Dalek's mysterious mining site in Bedfordshire. The human attempt to attack the Daleks with newly developed bombs end in failure, leaving Barbara (Jacqueline Hill), Dortmun (Alan Judd) and Jenny (Ann Davies) as the only survivors.

"The Dalek Invasion of Earth" continues to be both the most expansive Doctor Who serial so far, and the absolute bleakest. A group of human resistance fighters storm a Dalek saucer early into the episode and are almost entirely wiped out. Later a sole member of the team bravely confronts three Daleks to test a new explosive device, and dies for his troubles - the bomb does not even make a difference. Later Dalek serials of the 1960s and 1970s will turn the Daleks into a sort of fun monstrous enemy for the Doctor, which rant and rave been which are easily evaded by running down a corridor. Here in their second appearance they pose a horrifying threat: come across one, and you are almost certain to die.

The episode does an excellent job of splitting the regular cast up into three parallel storylines, with each feeling as necessary to the episode as the others. Through Barbara we get to see the aftermath of the failed attack on the Dalek saucer. Dortmun, who sent the men on the mission with bombs now known to be ineffective, is a picture of regret - to the point where he effectively commits suicide towards the episode's end just to attempt to make amends. Jenny is embittered and cold because she's lost so much that she's simply lost hope. The two characters offer powerful insights into the human experience underneath the Daleks. When they all decide to make a break for another rebel hideout, we are treated to the most prolonged location shoot Doctor Who has yet featured, including some iconic moments seeing Daleks marauding the deserted streets of London. It is genuinely creepy to see London so deserted: a technique that will be re-used decades later in Danny Boyle's 28 Days Later.

Ian takes a ride on the Dalek saucer with a freedom fighter named Larry (Graham Rigby). Larry explains that the Daleks are operating a huge mining operation in Bedfordshire - one that runs all the way towards the Earth's core. It is valuable plot exposition, told in an engaging fashion with plenty of danger - if caught on the ship, they will surely be exterminated.

Susan escapes from the failed attack with David Campbell (Peter Fraser). In a hugely effective moment we see her cowers in shadows, her eyes shut, listening to the sounds of runaway humans being murdered in the street by the Daleks. Later she begins to forge a closer relationship with David, particularly his emphatic insistence to remain on Earth and defeat the Daleks, and not to join Susan in escaping in the TARDIS. When they are reunited with the Doctor, he is quick to notice a growing romance and actually supports it. It is a beautiful scene between Hartnell and Ford, played in a very tender and playful manner: Susan is growing up and challenging the Doctor's authority, and in turn the Doctor is aware that she is becoming an adult in her own right. It is wonderful to watch.

This is the third great episode in a row for "The Dalek Invasion on Earth", which is currently rivalling the likes of "Marco Polo" and "The Aztecs" to be the best serial of the series thus far. In fact all six episodes to date of Series 2 have been good: the quality ratio holds steady at 100 per cent.
Posted by Grant at 9:02 AM