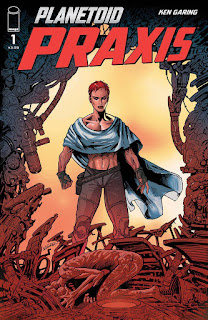 So back in March 2013 Image published the fifth and final issue of Ken Garing's Planetoid, a slightly flawed but very enjoyable miniseries about a man crash-landing on an industrial wasteland planet and having to choose between running away or staying to defend a group of colonists from invaders. While that series certainly left room for sequels and follow-ups, after almost four years I figured Garing had moved on. How wrong I was. Out this week is Planetoid: Praxis #1 the first issue of a belated and entirely unexpected sequel.

Some time after the events of the first series, in which the alien Ono Mao were successfully repelled, a single member of their race returns on an information-gathering mission. He is immediately captured, with the colonists debating whether or not to simply execute him. It is a strong opening issue, introducing a cast of engaging characters and setting up some strong story threads and ethical questions for the future. It also boasts some great artwork and inventive designs. The early pages, depicting the Ono Mao silently exploring its surroundings, are masterful. What's more, you really don't need to have read the first miniseries to enjoy and understand this new issue.

Planetoid was one of Image's first science fiction books, launching around the same time as Prophet and Saga. Image has published a lot of SF since then, and it's great to see one of the original back for a second run. (5/5)

Under the cut: reviews of Aquaman, Batman and The Electric Sublime.

A bridging issue, wrapping up loose threads from "The Deluge" (which ended a fortnight ago) while also kicking off a new threat for future issues. There is a new villain that looks intriguing, and is also a nice change from the more ocean-based threats of the past few years. I'm still not fully sold on Brad Walker's pencils. He has a slightly skewed sense of perspective when illustrating characters from above or below. Given the fortnightly schedule, however, it would be unfair to expect Phillipe Briones to do the art for every issue. (3/5)

I really like how serialised Tom King's run on Batman has turned out to be. While it has been broken up into a series of short story arcs, they all contribute to a much longer and more involved narrative. This new arc, "I Am Bane", is a case in point: in order to save Gotham Girl's life (from the first arc), Batman has kidnapped Psycho Pirates from the island fortress of the super-villain Bane (in the second arc). Now in arc three Bane is coming to Gotham City to take Psycho Pirate back. There's a great sense of foreboding in this issue as Bruce warns his various sidekicks to get out of town before Bane arrives, as well as a nice but unexpected return for Catwoman - I honestly thought that after last issue she would be gone for a while. David Finch's artwork is good, but he does still tend to over-sketch the faces of his male characters. (4/5)

The Electric Sublime has been the latest in a long line of comics I like to call "would have been a great DC Vertigo title back in the 1990s". While Vertigo continues to struggle, publishers like Image, Boom Studios and IDW have picked up the slack with a great range of weird fantasy and horror titles. This four-issue miniseries has been a case in point, using classical art as a means to tell a surreal sort of crime-horror story with inventive situations and settings and - in this issue's case - some particularly bleak moments. The open ending suggests a second miniseries may be in the offing. I really hope it is. (4/5)