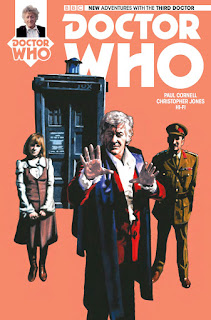 As a pretty keen fan of Doctor Who, I have been a big fan of how Titan Comics has been handling the franchise: monthly ongoings for the most recent Doctors, and occasional five-part miniseries for the classic incarnations. Most recently it has been Jon Pertwee's Third Doctor that has been the focus of a miniseries, and writer Paul Cornell has certainly provided a lot of period-appropriate touch points and character traits to give it a proper 1970s vibe.

Sadly the story itself has been pretty haphazard and silly, first bringing in the Second Doctor to assist and then revealing midway that he was actually the identical-looking villain Ramon Salamander in disguise. It was fairly torturous continuity porn, to be honest, and with the fifth and final issue dropping into stores it's pretty clear to me that the story simply didn't work. This final issue in particular feels all over the place, and is far too rushed to generate any proper sense of drama. In the past Cornell has written some of the best Doctor Who available, for both prose and television. It is a shame that in this case he didn't manage to pull things off.

Christopher Jones' art is excellent, and captures the likenesses of the various TV characters very well. I would be very happy to see him have a turn on another Doctor Who miniseries in the future. Preferably one with a stronger storyline. (2/5)

Under the cut: reviews of Batgirl, Highlander: The American Dream, and Spider-Gwen.

Occasionally a superhero comic will bring back a supervillain and you will simply be perplexed that someone thought that character was worth bringing back, or indeed that anybody really remembered the character at all. So anyway, Batgirl features the return of Batman villain Magpie this week, who has resorted to working the gig economy as a night-time bodyguard for urban pedestrians. Her job is tied into young tech entrepreneur Ethan Cobblepot. I liked the idea of giving the Penguin a son, but it feels lazy to simply make him yet another villain working on a criminal scheme. Chris Wildgoose's artwork has a nice exaggerated style to it, and Jon Lam enhances it with particularly crisp inks. It's a great look; I'd be happy to see both stick around for a while. (3/5)

It isn't just The Dark Crystal getting an unexpected comic book revival this week. Over at IDW, Brian Ruckley and Andrea Mutti are telling a fresh story for Highlander, another 1980s movie fantasy with a huge cult audience. This one is definitely for the already-converted fans, since it assumes the reader already knows all about the original film's premise. Within that context, however, it's pretty solid and entertaining stuff. It matches the tone of the film, and copies its back-and-forth use of present-day and historical storylines. It's far from essentially, but it is well written and nicely illustrated. (3/5)

The Miles Morales/Gwen Stacy alternative universe crossover continues. It feels a little messy; do you ever get that feeling reading a monthly comic where you sort of feel you are following the story, but at the same time struggle to remember what is actually going on? I think part of the problem is that the crossover is assuming prior knowledge of both monthly books, and have absolutely no idea of Spider-Gwen beyond knowing the book exists. The art is okay, the dialogue is funny, and the awkward teenage romance between Miles and Gwen (and guest character Kamala Khan) works pretty well. Despite all the good, however, I'm simply failing to engage with it. (3/5)
Posted by Grant at 5:45 PM