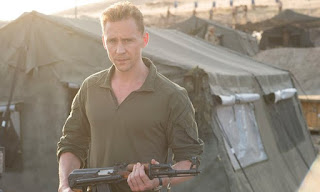 Jonathan Pine (Tom Hiddleston) has defied the orders of his handler Angela Burr (Olivia Colman) and accompanied arms trader Richard Roper (Hugh Laurie) to his latest deal in Turkey. Jonathan has never been closer to trapping Roper and exposing his criminal enterprise, but with his location growing more and more isolated and with Corky (Tom Hollander) still working to unseat him in Roper's circle, it may be too dangerous to continue.

There is a striking change in tone with this fifth episode, which takes the series out of its luxurious settings in Spain and Switzerland and shifting instead to the industrial ports and wilds of Turkey. The stakes have been raised considerably, since Jonathan is now operating without any support from London at all. The series also shifts its visual palette: the softer, richer colours of earlier episodes have given way to muddy greys and browns. As Jonathan moves closer to the centre of Roper's operations, so too does the audience: it is all feeling much more vicious and unpleasant.

At one point it actually looks as if Roper's time may be up, as Jonathan sends word to London about a massive shipment of arms headed for Syria, and Angela manages to use her American contact to get the shipment stopped and searched. It is all a ruse, which is not a surprise - there's a whole episode left - but is still entertaining because it is a ruse that was so carefully foreshadowed in advance. The episode ends with Angela's operation in tatters, and her hopes of catching Roper finished.

And of course this is it for Corky as well. He traps Jonathan with just a bit too much self-satisfaction and confidence, and winds up dead as a result. It's a great fight scene: messy, incoherent and frantic, and with each combatant actually looking as if they know they're going to die if they slip up for even a moment. Corky was such a loathsome, seedy sort of character that, rather unexpectedly, he wound up being my favourite character. Tom Hollander simply played him so damn well.

When presented with the knowledge that there was a mole inside his operation, as well as the dead body of his former second-in-command, Roper still seems to almost trust Jonathan. It is the sort of action that seems slightly daft in retrospect, but of course the episode moves so swiftly and so effectively that in the moment it never seems quite as absurd. The episode ends taking Jonathan all the way back to where his adventure started: the Nefertiti Hotel in Cairo. It is a very traditional sort of plot development, but of course it's traditional because it is also rather elegant. It brings the series full circle, and book-ends events very smoothly. All that is left now is the climax.
Posted by Grant at 12:09 PM